Tonight I started working on the engine wiring harness.  Doing an engine swap requires some sort of engine harness to be used along with the computer (ECM) in order to make the engine work.  This is the part where “old school” hot-rodders shudder and panic about.  This is also the part the trips up many folks attempting to run electronic fuel injection (EFI).

I’ve worked with my cousin Jim for the past 15 years perfecting the fine art of transforming a stock wiring harness into something that can be used to fully run a modern EFI engine in a classic car.  At first we worked on “throttle body” engines – basically a glorified carburetor but with the advantage of electronics.  These were the early EFI setups that offered much better economy than a plain carburetor but had a long way to go.  Throttle bodies evolved into individual injectors feeding each cylinder and more sophisticated ECM’s.

Through the years, we were able to adapt the L98 Tuned Port v8 with it’s distinctive intake with eight runners going to each cylinder.  As the L98’s became scarce we moved to LT1’s and LT4’s.  During this time, we also mastered the L32 V6 as originally fitted to bowtie6.  The next step was the LSx family of engines.  Currently we’ve focused on the ECOTEC engine as fitted in Jim’s TR4 and now my TR6.

The throttle body harnesses were the simplest.  No much really to figure out.  When we started using L98’s and LTx’s in Jaguar XJ6 and XJS conversions, at first we sourced the harnesses.  They were not cheap, so we took a stab at using original GM harnesses and cleaning them up.  If done properly they make an excellent harness however it takes some effort to figure them out. 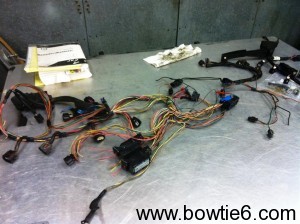 We don’t use the original GM fusebox.  We also remove redundant ground wires and hot feeds, thus allowing the harness to be much simpler and easier to deal with.  Depending on what donor harness you use, certain pinouts on the ECM connectors must be relocated.  This is all done by using original GM Factory Service Manuals.

I’ll have more as the process takes shape.  This is actually a lot of fun however it is a little time consuming.  At the end of the day, it is a very rewarding feeling when the harness allows the engine to run.