Engine wiring is progressing right along,  albeit slow.  This part of building a car takes time!

So far the engine harness is complete.  All wires to the ECM have been accounted for and the main looms have been covered with crinkle tubing.  This tubing protects all wires and keeps things looking neat and professional. 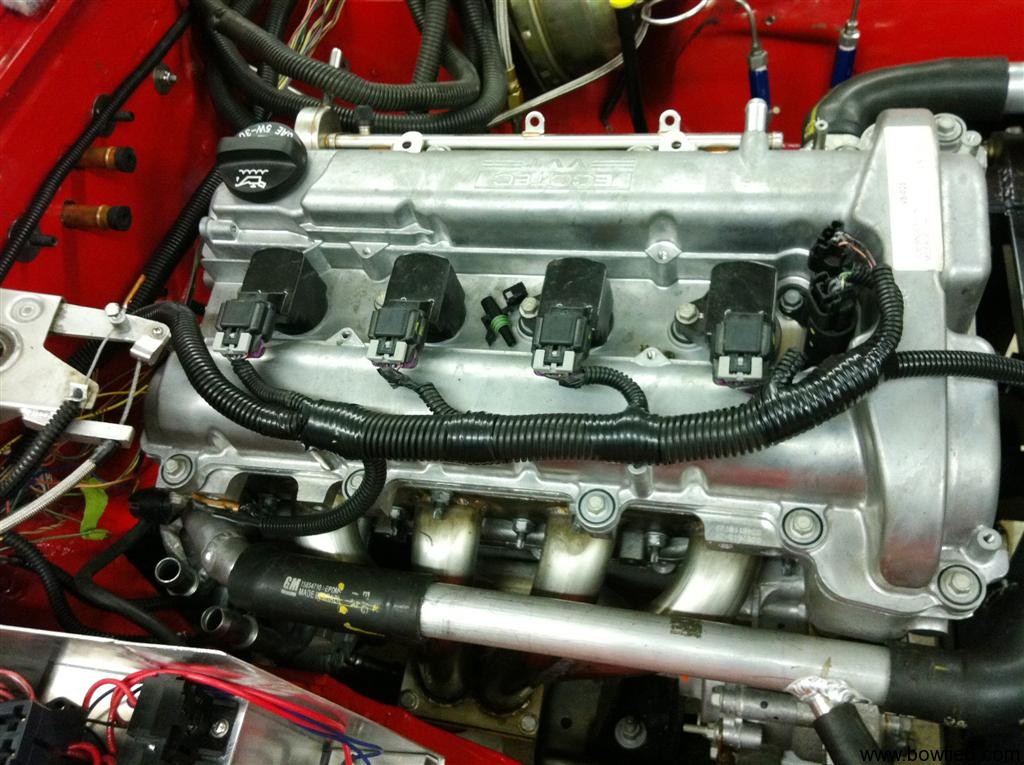 Another engine bay picture showing the fuse box on the left, the coolant overflow tank, coolant lines and brake master cylinder and hydraulic clutch reservoir.  The coolant expansion tank is all hand made aluminium.  Missing from the coolant expansion tank is a small rubber hose going to an overflow tank behind the radiator; also hand made aluminium.  And yes, all the rubber coolant hoses are missing their clamps.  Just haven’t had a chance to get there yet! 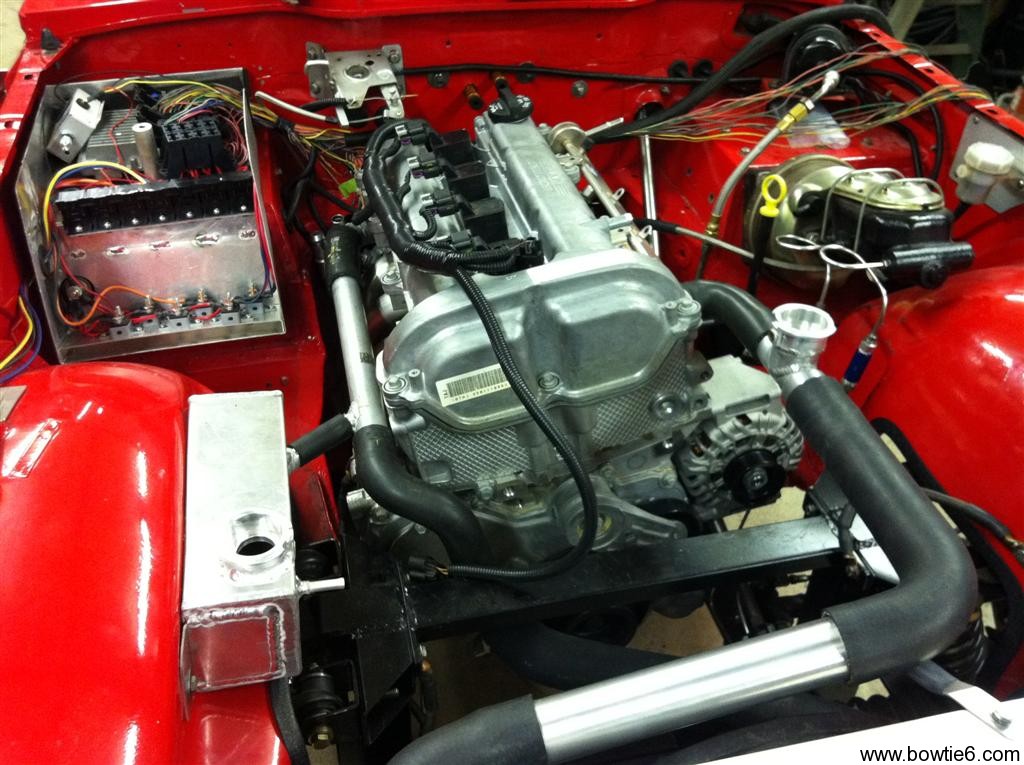 Below, is a close up of the new fusebox.  On the bottom left, you see the new fuse box.  This is where all the relays, circuit breakers and fuses that control the engine compartment reside.  This is what it looks like: 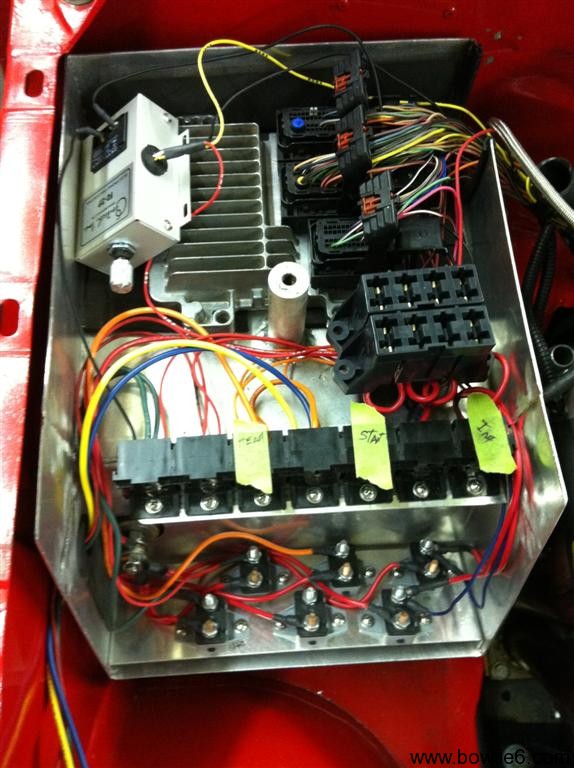 So what do we have here?

Starting from the bottom:  below the box, hidden from view is a post that goes through the firewall.  This post is insulated with a Bakelite insulator.  From this post, wires feed battery power to the circuit breakers.  There are a total of seven circuit breakers; one for each relay.

Above the circuit breakers there are seven relays.  They are used as follows:

Finally above all this are two banks of fuses.  To the left of the fuses is the electric fan controller and below that, the engine’s ECM.

Why so many relays?  The idea here is to use a relay for each device that requires high current, for example the electric engine fan.  The idea is to let the switches run low current controlling the electromagnet in each relay.

I know what you are going to say:  where are the turn signals and parking lights?  Yes, they have been left out.  Not by mistake, but by design.  Underneath the dash will be a smaller fuse box, containing fuses and four relays.  This is the part I’m working on now, and will be featured in the next installment…  Stay tuned.

Making a custom wiring harness is an interesting process.  It takes time and careful thought.  Is it for everyone?  No.  This is the second time I’ve wired bowtie6 and this time, I’ve applied several lessons learned from the first time.  Basically:  make things as easy as possible.

I’ve written previously about all this but I thought it would be nice to give a more in-depth view of the work I’ve done.  Maybe this might be of help for someone, so let me start with the engine.

To start with, a factory GM engine harness was sourced.  Contrary to popular belief, one does not need to buy a special harness (they are usually very expensive) to make an EFI engine run.  When properly modified a factory harness is an excellent starting point:  all the sensor plugs are there and the wire is of excellent quality.  Special care has to be taken however, when the harness is extracted from the donor car:  you want to make sure you get all the plugs and pigtails, including the fly-by-wire throttle pedal and its wiring pigtail.

I’ve seen many conversions where folks take an original harness and along with that, the instrument cluster, fuse box, firewall connectors, steering, etc.  This results in a cobbled up, complicated affair.  Why?

There is a better way.  In my case, the harness was sourced from an Ecotec powered vehicle: a Chevy HHR.  With the aid of the factory service manual for the Solstice/Sky, the harness was simplified by removing unnecessary circuits.  Many wires were shortened and by doing this the harness was greatly simplified and made to fit the engine bay of the TR6.  I did this because again, I’ve seen many conversions where people don’t resize the harness and this gives the engine compartment a very cluttered, busy look.  I’ve also seen conversions where great care has been taken to hide as much of the harness as possible.  This gives the installation a very professional, “factory” look which is not easy to do but if you take your time makes a huge difference.

In the case of the older six and eight cylinder engines the VATS can be disabled by adding a small, inexpensive aftermarket module or by having the ECM modified.  This solves the problem of having to use the original key, tumbler and steering column.  With the previous V6 in bowtie6, I used the aftermarket module.  It basically had a switched hot lead, a ground wire and a wire that was in turn spliced into a pin on the ECM.  With the Ecotec, we did not use a module instead we used software running on a laptop to disable the VATS circuit.

The ECM came from the same donor HHR the harness came from.  This gives a good starting point and is compatible with all the sensors, fly-by-wire throttle, etc of the “original” vehicle.  In my case, I’m running the 5 speed gearbox as fitted to the Solstice/Sky therefore the separate computer used to run the electronic automatic gearbox is removed – this was part of that “simplification” of the harness I mentioned previously.

After all the work of checking every wire for continuity, removing unnecessary wires and length alterations, several loose wires were left:

This pretty much wraps up the engine harness.  All this has been done so basically bowtie6‘s Ecotec is all wired up.  Not for the faint of heart, this process alone has taken many hours to accomplish.  There is not easy way out here, but the result is very cool indeed.

So what is left to do?  I’ve taken a different approach this time.  The first time I wired bowtie6, there was one central fusebox where all circuits originated from.  This was fine and dandy.  The fuse box was hidden behind the dash but the problem was twofold: 1) a huge amount of wires coming and going and 2) it was extremely hard to get to.  I once had a fuse blow and it was a hell of a job to find the blown fuse.

This time, the new harness is simpler and has been broken down into three main sections:

In the next installment I’ll have more details about the engine compartment wiring which has been completed.  Stay tuned…