There is the concept of a Surrey top for a TR4/250.  OK – they are nice but they are hard to find.  They have glass and they are heavy.  They do offer a removable centre section and yes, they are pretty cool.  But here is a variation on the theme…

My cousin Jim’s TR4 has been an awesome car so far.  The ECOTEC has been magnificent providing plenty of power and lots of fun.  However summer is upon us and it gets a little hot to go topless the whole time.  What to do?  Order a canvas top and look like any other TR4?  Nah.  How about this: 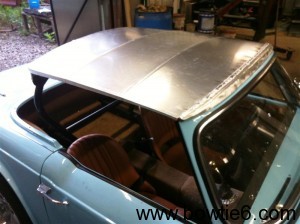 Jim’s TR4 has a rollbar bolted to the bespoke frame on special mounts.  Off the hoop, there are two tabs offering a way to mount the hand-made aluminium “bikini top” shown on the picture at left.  The three “ribs” have been formed on a Pullmax machine.  All total this top is not heavy at all, maybe a couple of pounds.  Not exactly “stock” or “original”, but what the hell.  Jim is a master craftsman and this car is indeed unique. 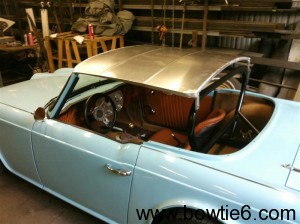 Here is another shot of the new top.  It shows the mounts on the rollbar.  The front attaches to the factory mounts on the windshield frame.  Two bolts will hold that in place.  Jim has made this in such a way that the side glass can be rolled up and it will be perfectly aligned with the edge of the new “top” – and by doing so, the car could be driven with light drizzle and this would prevent one from getting soaked.  This is the inspiration to the new “top”.  Granted, this is not everyone’s cup of tea but what the hell.  It certainly looks trick!

I realize the top looks a little “crude” – it was only made today and has not been totally finished yet.  We were kicking around the idea of fully polishing this top – after all it is aluminium.  The idea would be to make it as shiny as chrome.  Then again, it might just get painted either body colour or some other contrasting shade.  We were also kicking around the idea of covering it with some convertible top canvas to give it a faux look.  One thing we can be certain of:  take a look at the following picture: 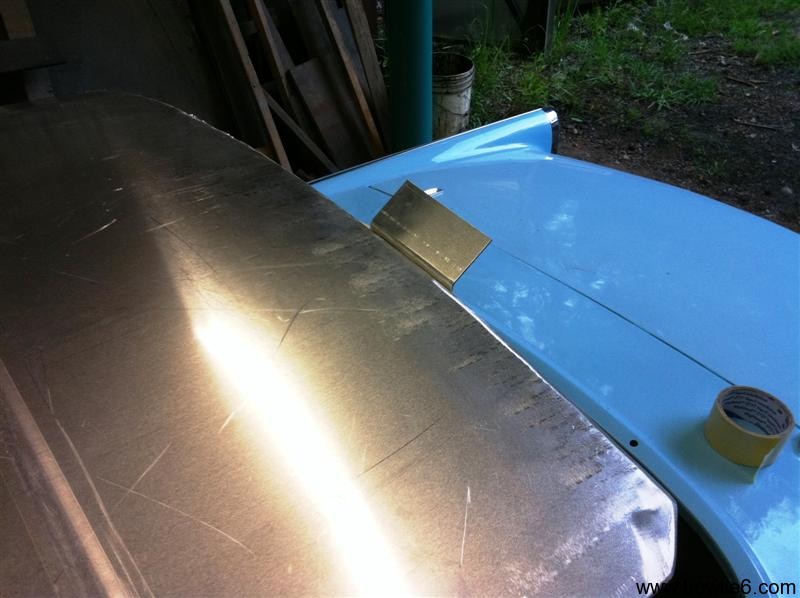 Check out the little tab…  That is a small proof-of-concept:  yes, the top is going to have a mild NASCAR “wing” on it.  This will not only look good, it will provide some downforce at high sped.  And believe me:  the TR4 needs it.  With the extra pop of the ECOTEC, the car certainly can use a few free pounds of downforce.  After all, all the pressure would be transmitted to the rollbar, mounted directly to the frame right above the rear axle…  Pretty cool, huh? 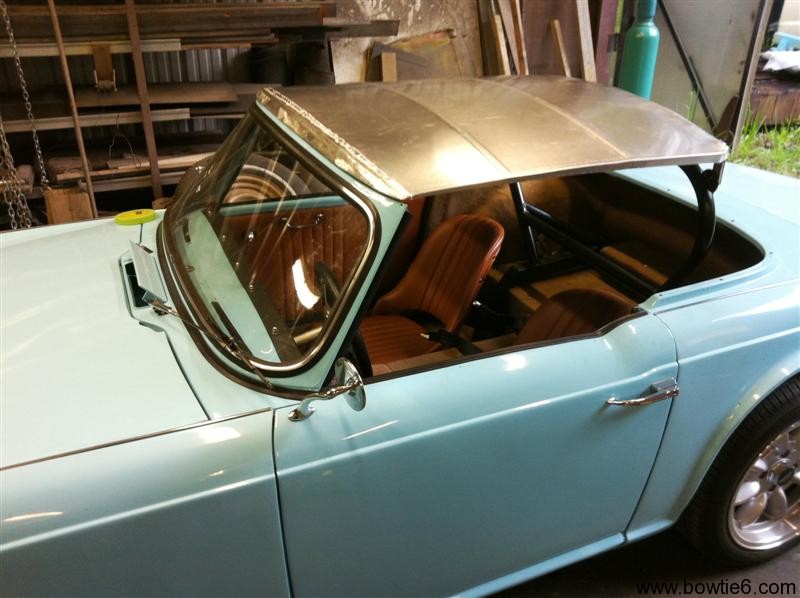