After installing countless sheets of Dynamat Extreme all over the place ($$), thick sound proofing carpet backing, new carpet, plugging up the firewall for any small holes, modifying the exhaust and misc other improvements, bowtie6 is very quiet now.  While this is a great thing, it also brings with it the ability to notice other smaller aggravating sources for noise. I started noticing a very annoying squeak from underneath the bonnet (the hood).

This darn squeak would happen on bumpy roads as well as smooth blacktop.  Since it was coming from under the bonnet I started adjusting stuff.  I made sure the two rubber bumpers were up to snuff, made sure the latch was nice and centered and double checked all bolts.  Fender bolts, hinge bolts, grille, the works.  Still – squeak city.  Damn.

While visiting with a buddy of mine that works on TR6’s – Mike Richardson – over the holidays, I discussed the annoying squeak.  We went for a ride, and Mike laughed and said, “It’s the bonnet rod!”.  Duh!

Mike suggested a couple of things.  The first was to tighten the nut holding the rod in place.  Mike reached into his toolbox and pulled out a 7/16″ wrench and tightened the nut just a tad.  Since Mike restores TR6’s back to “original” I figured this might do the trick.  Well after chewing the fat for a while, I headed back home.  Damn squeak was still there.

Remember I said above he suggested two things?  Mike suggested that if after tightening the nut it still squeaked, to take a closer look at the rod and see if there was any evidence of it rubbing on the rod guide on the body.  Sure enough, there was a shiny spot on the rod where it touches the guide.

Properly mounted the rod nut should be a loose fit.  This enables the rod to fall in place into the recess on the rod guide when the bonnet is lifted open.  If the nut is too tight, then gravity cannot let the rod fall in place and one has to manually intervene, which is not good.  Mike said this is out of the “Original Restoration Handbook”.  Hmmm…  I guess I never read that book.  Shame on me.

However, leaving the nut a little on the loose side – according to Mike – the rod has a tendency to bounce and move around.  This is how that shiny spot forms on the rod and thus the source of the squeak.  Hmmm.  I guess the “purists” know a thing or two I don’t know.  Imagine that.

Mike looked at me and said: “Get some shrink wrap and cover up any shiny areas.  This will solve your squeaks”.

So when I got back home, I opened my toolbox with all my ‘lectrical stuff in it and found the appropriate size shrink wrap.  I cut an appropriate length, aligned it over the shiny areas and let the hot air gun do the rest.  This is what it looks like: 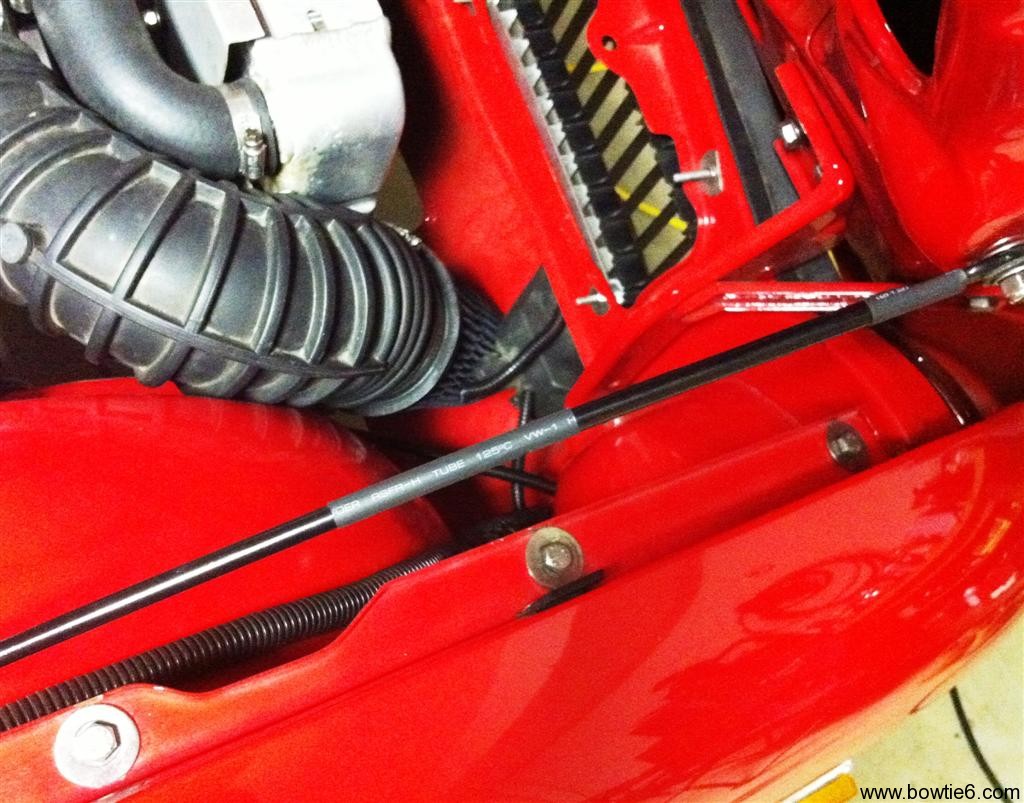 I put the nut back on, careful not to tighten it too much (in accordance to the “Original Restoration Handbook”) and went for a ride.

Well folks, that did the trick.  No more annoying squeak.  Imagine that.

So if you have an annoying squeak under the hood that is driving you nuts, you might be able to do a similar fix as shown above.  Mind you, it will not score you many points with the judges but I can’t stand squeaks.  Of course, in my case…  who cares what the judges say!