Today’s post is a rant about the glorious South Carolina DMV and how bad it sucks.  I’ve written about the South Carolina DMV is in an earlier post:  Honda S2000 Gets a Tag.  Today I have an even better story.  So quoting from the famous brewery, “If you’ve got the time, we have the err… story!”…  Read on because you are in for a real treat… 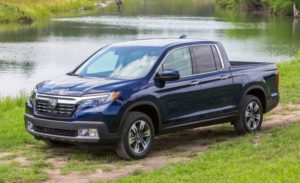 You see, one of my buddies at work recently bought a new 2017 Honda Ridgeline like the one in today’s featured picture.  Not exactly the same color, but my friend’s Ridgeline came fully equipped with every possible bell & whistle available.  I am not a truck kinda guy, but this one is something else!

A few days after my friend bought his new pride and joy, we went to lunch and he said “Check this out!”…  He about scared the crap out of me:  he floored the throttle, let go the wheel and as we approached a red light (with a car stopped ahead of us), the Ridgeline immediately came to a controlled halt – it automatically intervened and handled the situation.  I’m like, damn!!!  Amazing what technology can do for you, right?

OK back to the South Carolina DMV…

You see my buddy had to travel out-of-state to buy his truck.  He wanted all the gizmos on it and the only one with such accoutrements was found in a different state.  The deal went according to plan, and included the fee for the tag and transfer which is pretty much a given.  Right?  WRONG!!!  My poor friend has had en experience from hell.

You see, the South Carolina DMV gives you 45 days to display the paper, temporary tag.  During that time (or sooner), one should get a) the tag and b) the title.  In my buddy’s case this went terribly wrong.  As it has turned out, during the process of entering the Ridgeline’s vital statistics into the DMV’s database the person doing the typing fat-fingered the empty weight of the vehicle.  Instead of typing 4,100 lbs, they entered 41,000 lbs.

This is basic “Programming for Dummy’s” stuff:  you would have thought the online system at the DMV would have prevented the data-entry clerk from entering 41,000 lbs as the empty weight of a pickup.  But no.  The system accepted the value and immediately produced a very expensive tag transfer fee.  This in turn, caused a pileup of epic proportions between the DMV, the dealer and the bank.

During this time my buddy is patiently waiting for his new tag.  Instead he gets one of those “oh shit” letters informing him the tag is nowhere near because his Ridgeline has magically morphed into a 41,000 Honda tractor-trailer and he now owes something like $4,500 worth of title transfer fees to the state’s coffers.  Day-um, Nikki Haley – today is NOT a good day in the state of South Carolina!!!!

In case you don’t know, Nikki Haley is South Carolina’s illustrious governess and future ambassador to the United Nations.  And she made it a point when she took office to make all employees answer the phone by saying how great a day it was in South Carolina.  Back to my friend’s story.

For the past week my friend has had to work from home.  The 45 day period has elapsed and if you follow the letter-of-the-law, the vehicle cannot be driven in the state of South Carolina.  My friend has made many trips to the DMV and every time somebody just passes the buck to someone else.  The clerks say they can’t change things; they need a supervisor.  The supervisors can’t seem to get their act together.  Today, my friend told me the clerk said all traces of the case have been lost and they can’t tell him where they are.  Honest!  I’m not making this up.  This is for real.

Seriously the irony in all this is that a mistake by a data-entry clerk has landed in the lap of my buddy.  The DMV has clearly stated the 45 day tag cannot be extended and the car not be driven on public roads.  He has also been told this will be “maybe” solved in the next few days.  And of course, all this from folks we (as tax payers) indirectly pay for in the form of their salaries.

Bureaucracy is a bad thing.  Add ineptitude and you have a disaster.  It is a crying shame that in this age of high technology, vehicles are still given “titles” and rely on all this antiquated paperwork.  Then again, I think I am preaching to the choir.

And as always when it comes to this type of situation, it is the tax payer (us) that get the shaft up the arse.

Hopefully soon, I’ll have an update with a satisfactory resolution.  In the meantime, didn’t I tell you this was an interesting story?

7 thoughts on “The South Carolina DMV”