In the last couple of posts I’ve described the reason for taking apart the rear suspension on bowtie6.  I had to send the coilovers back to the manufacturer for servicing and sure enough, after a few days they arrived back in as-new condition.  This morning, I started cleaning all the hardware and springs followed by a dry-run:  installing the coilovers on the rear suspension (without springs) and going through the entire range of motion of the axle using my jack.  I just wanted to make sure nothing was binding or out of alignment.  All checked out, so time to quit farting around and get down to business…

As you can see in the featured picture above, I have a small can of fresh anti-seize handy.  I use anti-seize on pretty much all bolts I use.  I cringe when I watch “restoration” shows on TV and see very expensive cars assembled without a single bolt treated with anti-seize.  So why make such a big deal?  Anti-seize is a very cheap insurance for preventing a bolt from galling. Especially when dealing with aluminum parts as in this case, where the entire coilover body is aluminum alloy.  Furthermore, there will be a day when all bolts will be taken apart.  Anti-seize is just an easy way to prevent unnecessary binding. 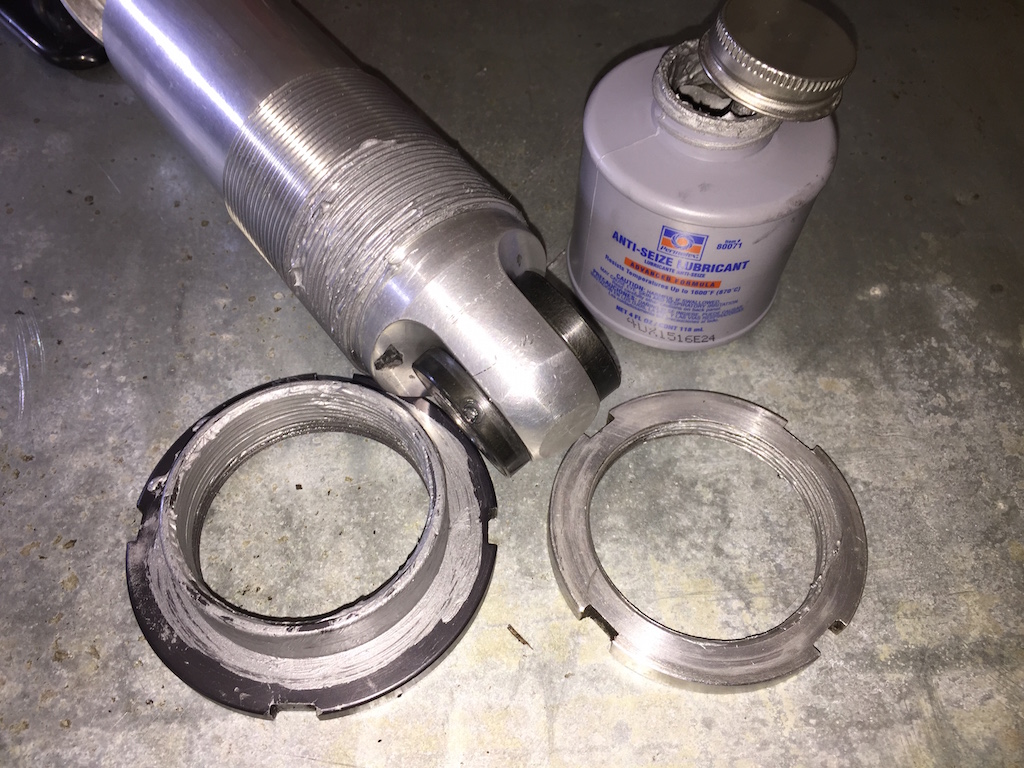 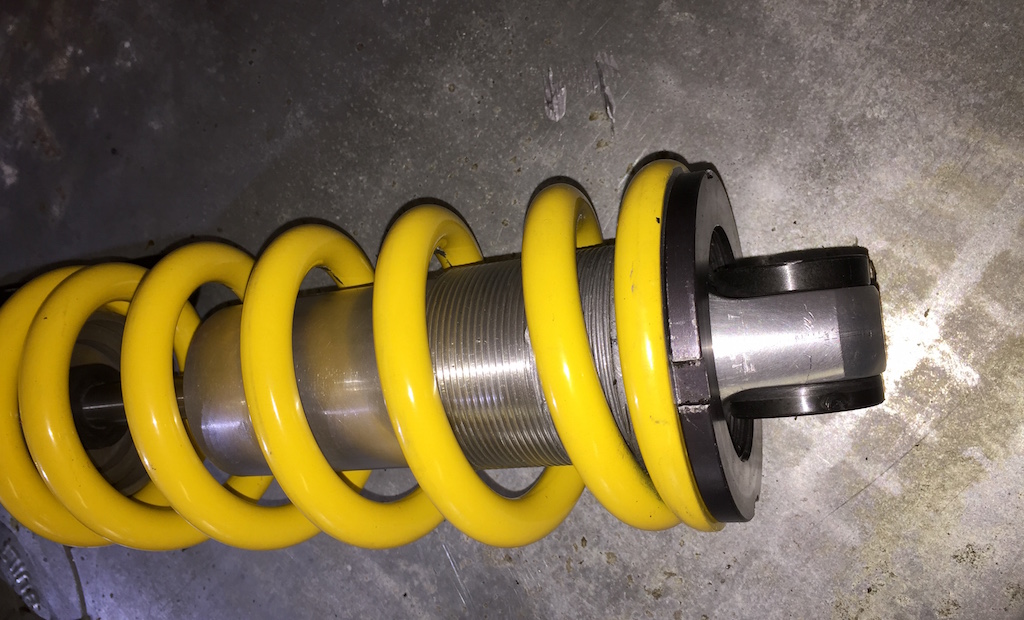 The spring seat ready to be tightened.  The lip has threads and they actually start before the spring even starts to compress.  Duh!  That is the idea!  No more spring compressor. 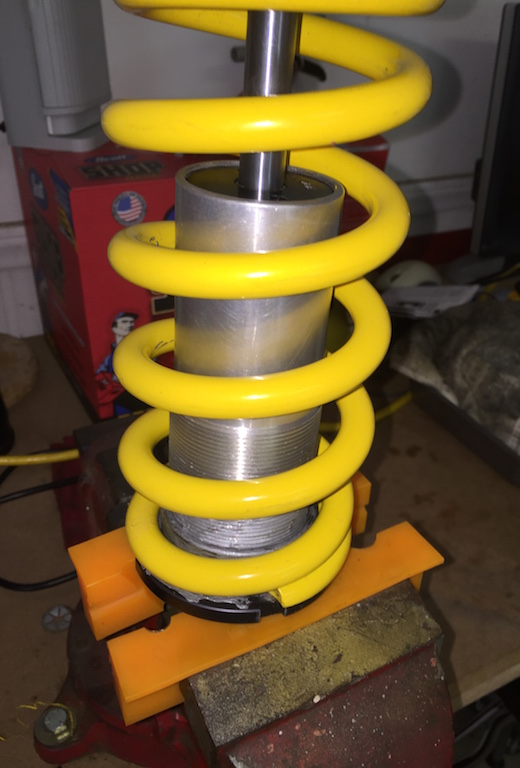 Here is the assembly chucked up on the vise using a set of soft jaws to prevent from damaging the bottom bearing.  Using a special wrench, I started tightening the spring seat until I had enough threads left to safely hold the lock nut. 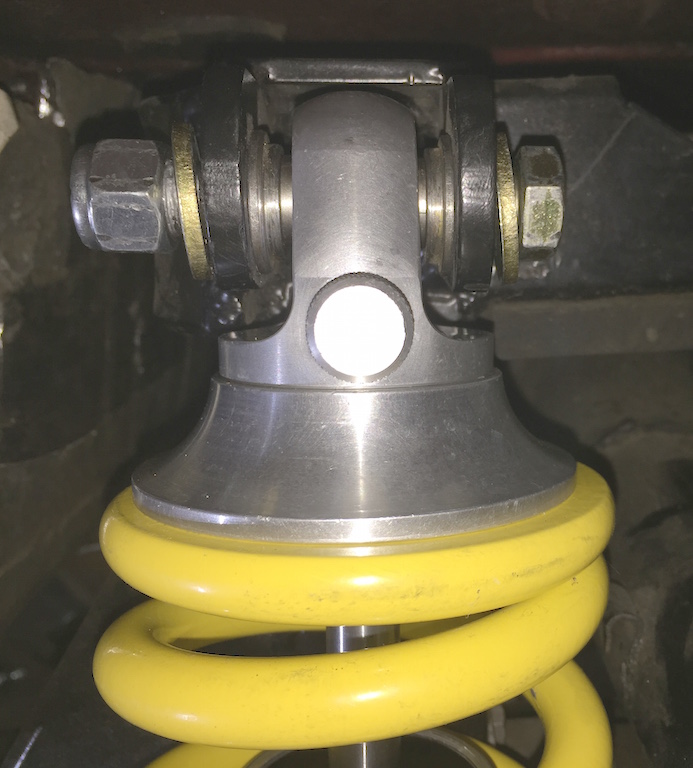 This is a closeup of the top mount:  the black “U-shaped” tab is an extension of the frame.  If you look closely, there are two delicately machined spacers on either side of the inner “U-shaped” mount.  My cousin Jim made those on his lathe and it is just a shame these gems are hidden from view.  This is not store-bought stuff! 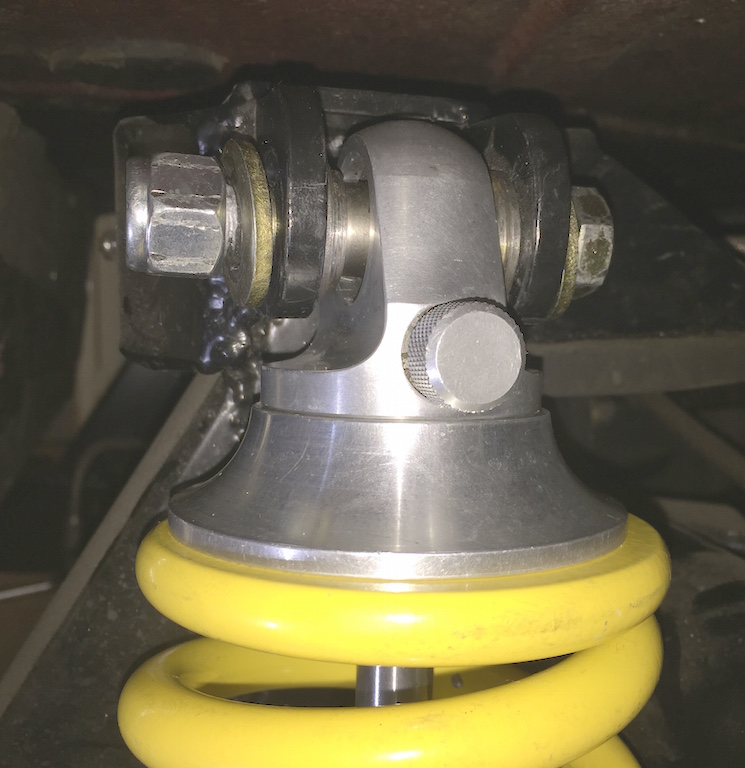 The bottom mount does not float.  Instead, it is fixed against the mount extending from the axle.  If both mounts were fixed then the coilover would bind when the axle moved one side higher than the other.  You can also see the axle mount with some paint missing.  That comes from the spacer that lines up the coilover with the top mount. 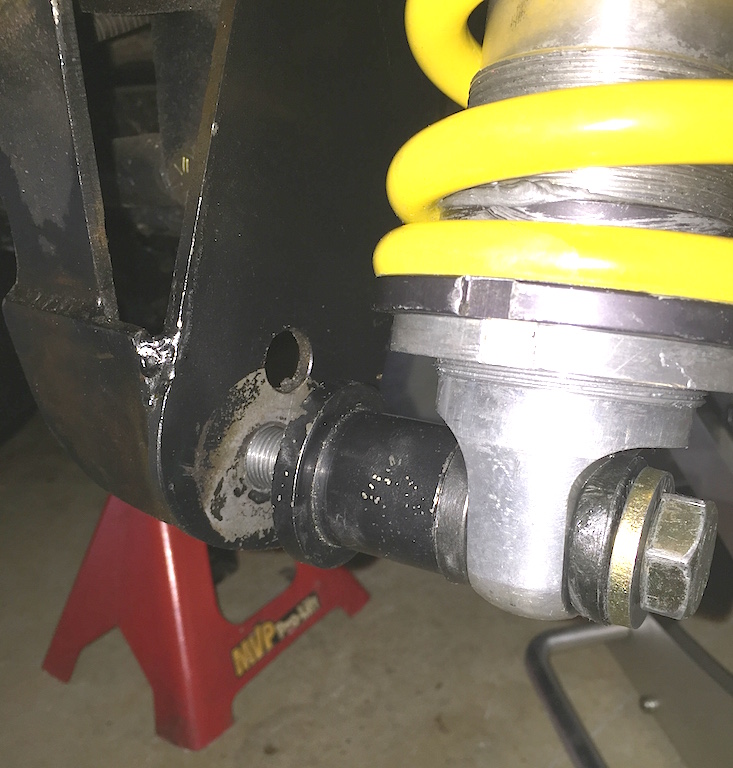 And finally, on this picture you can see the machined spacer.  And now, an explanation on ride height…

I’ve been asked to find a way to “lower” the ride height on the rear suspension on bowtie6.  Unfortunately, there is no way to lower things any more than where they are today.  As you can see in the picture above, I am already using the lowest opening on the lower mount bolt. 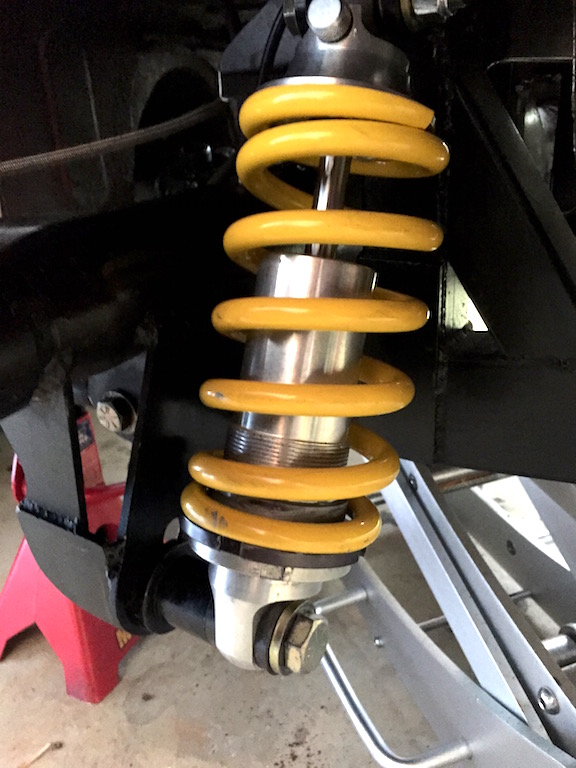 And here is the result!  All ready to go for a test drive!

I realize bowtie6‘s rear ride height is a tad on the “high” side.  It would be nice to drop it another inch or so.  However, since I am running larger than stock rear tires they could hit the inner fenders.  This would not be good for the paint!  Another idea to carry out the lowering would be to order new, shorter coilovers.  However these coilovers are not cheap and I rather not have to get another set.

And now an “extra”!  I do not endorse products by name – I just don’t like to advertise for “free” – but there are exceptions.  Last week, I had this arrive after placing an online order: 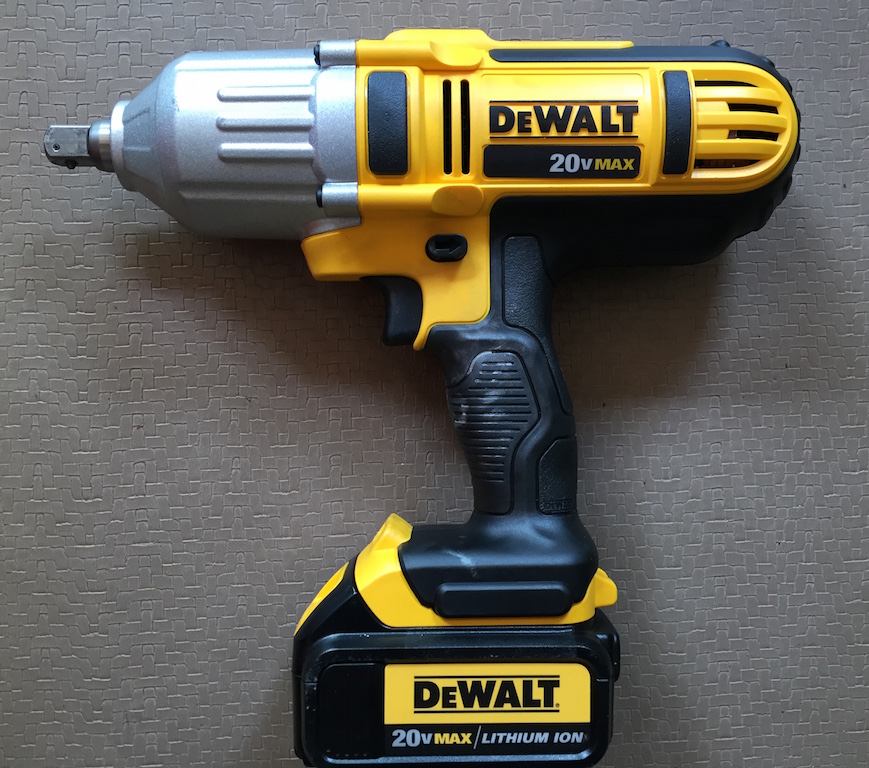 This is a 1/2 inch, 20 Volt DeWalt electric impact wrench.  I bought this unit from the “Factory Outlet” store – it is online and they have some great prices on “refurb” units.  I also have a 3/8 impact wrench, a 6.5″ saw and an LED light plus the rechargeable battery station.  They all share the bottom rechargeable 20V Max battery.  My air wrenches are now retired!  These rechargeable electric tools are awesome!  I highly recommend them.

Last but not least:  I took bowtie6 for a spirited drive once all was tight and torqued to spec.  I had to fiddle with the rebound damping setting a bit but the difference is certainly noticeable.  The rear suspension is much more planted now and is a delight to push trough an “on ramp”!  Nice!!