My aging daily driver – a 1995 Z28 Camaro – got treated to a set of new tires this week.  During a span of 20 years and over 96,000 miles, this is the fourth set of tires I’ve bought.  Factory tires were GoodYear GSC’s;  an advanced high performance tire for the time, they were fair, with good dry adhesion but not so great in the wet.  I replaced the factory fitted tires with 2 more sets of GSC’s which I purchased from the company that converted Z28 Camaros to SS’s back in the day.  These were brand new “take offs” sold at a significant discount and I ordered two sets at different times.  When the last set of the GSC’s wore out, I bought BFG Comps and what a difference!  The BFG’s were much nicer in the dry and wet as well.

The new offering from BFG is the g-Force Sport Comp 2.  I have a set of these tires on my S2000 and have been very pleased with them, therefore I decided this would be a good choice for the Camaro.  They are soft, sticky, and responsive in dry and wet weather alike. 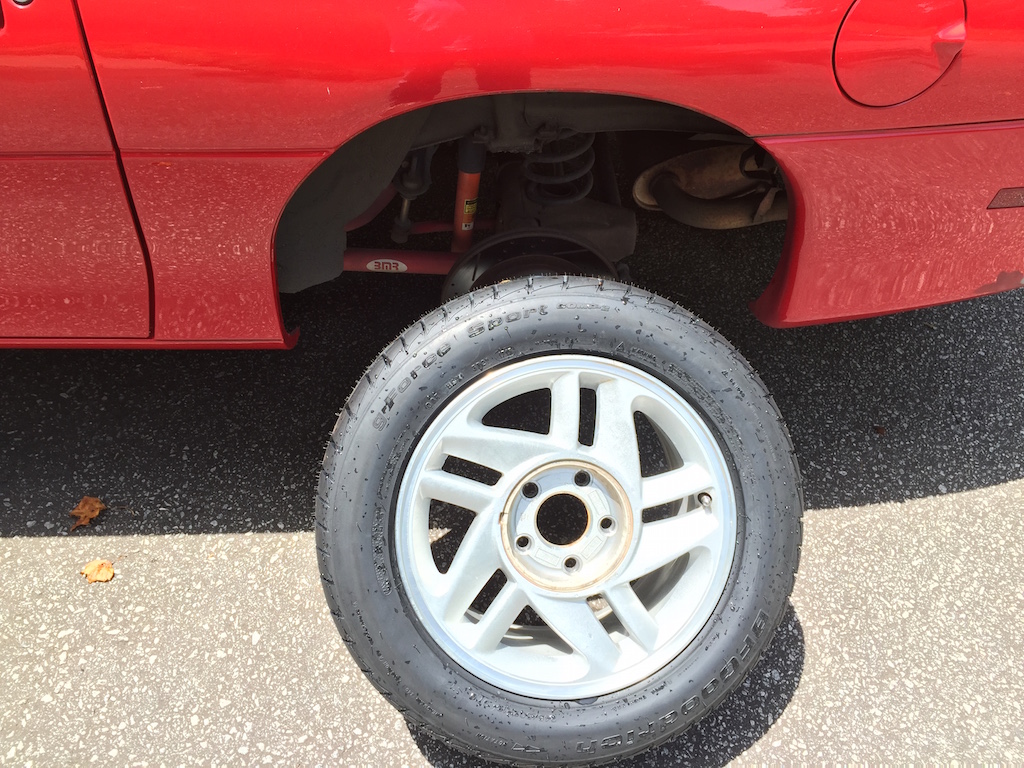 Usually, I buy tires mail-order.  I have them delivered via brown truck to my doorstep and then I have a local shop install and balance them.  Unfortunately, this is getting more and more expensive to do because local shops are charging more for installation.  I did my research and for this particular deal the total price was a toss-up.  So I decided to go with the local chain store with “discount” as part of their name.

In the past, I’ve experienced issues with tire stores (mainly with the larger chain stores) regarding the way lugs get tightened.  I am a firm believer in a methodical torquing of lug nuts as opposed to letting an air gun do the work.  Using a torque wrench ensures even tightening (yes, I know…  stretching the bolt) and thus prevents any chance of warping rotors.  I realize this is a matter of opinion but for me, this is what works.  As the saying goes “…you mileage may vary”.

The new tires were not in the store’s stock, so they were ordered and arrived the next day as promised.  I took all four wheels (with the old tires) to the tire store and I suppose, disappointed the salesperson because he wanted to do an “inspection” of my Camaro.  Instead, I heard him sigh when he saw the wheels in wifie’s HHR.  As I had requested, the new tires were mounted and ready several hours later, after I left work.  I made a quick inspection of each tire and found two tires missing their air valve caps.  I pointed out I had paid ‘extra’ for the metal stems & caps and wanted the caps installed.  The tire store employee stated it was “his bad” and promptly sourced the missing caps.  This would be the first of several “surprises”…

Once home, I found all four tires filthy.  On the outside edge of each wheel I found a generous smear of the white lubricant used to assemble new tires on rims and on the inside of each wheel, the installer did not pay attention to properly clean the place for the new stick on weights.  Finally, I found the sticky backing left by the previous stick on weights.  The tech doing the install did not do a very thorough job.  In fairness to them, they are not in the business of cleaning wheels however they could have done better especially in the spot for the new stick on weight. 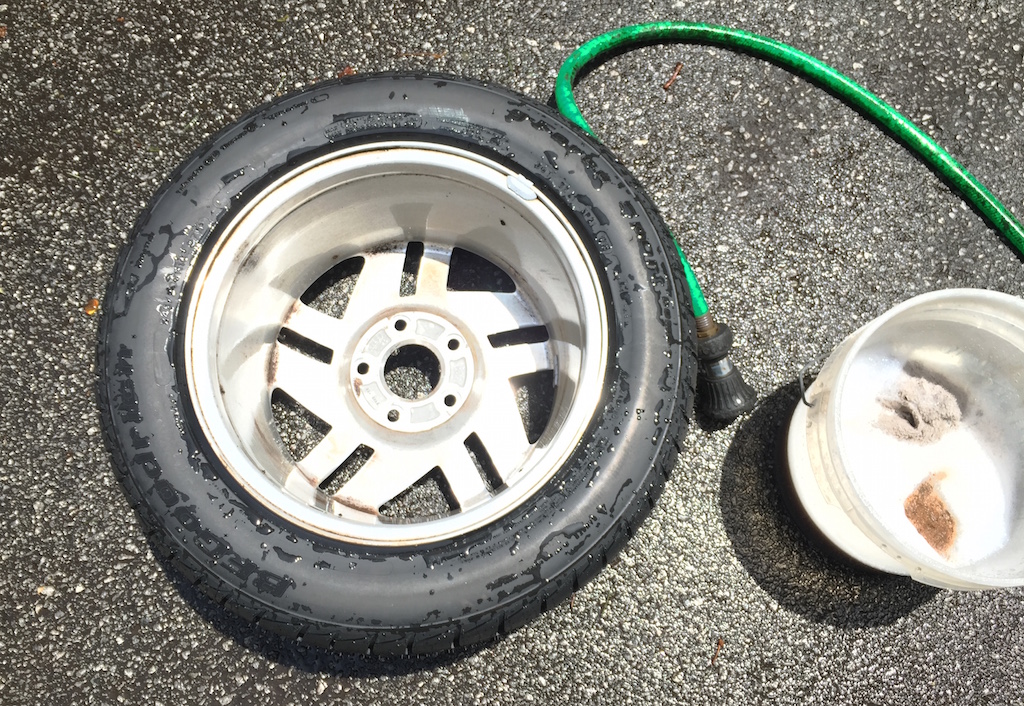 After some elbow grease and some soap and water, the rims turned out good as new.  It took a little effort but this looked more like it.  This is where I found the next surprise:  I requested for the balancing weights be placed on the inside of each rim and on the inside lip.  The tech did a good job on the wheel above:  it has one weight and on the inside it had 3 small stick on weights as shown in the following picture. 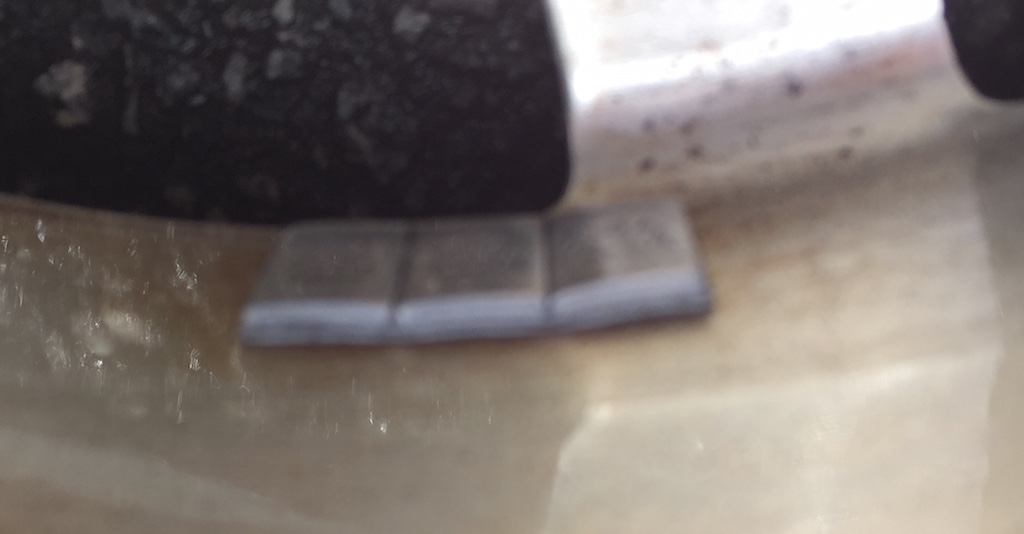 Two of the four wheels looked this good.  However, on the other two wheels the tech didn’t do such a hot job.  Take a look: 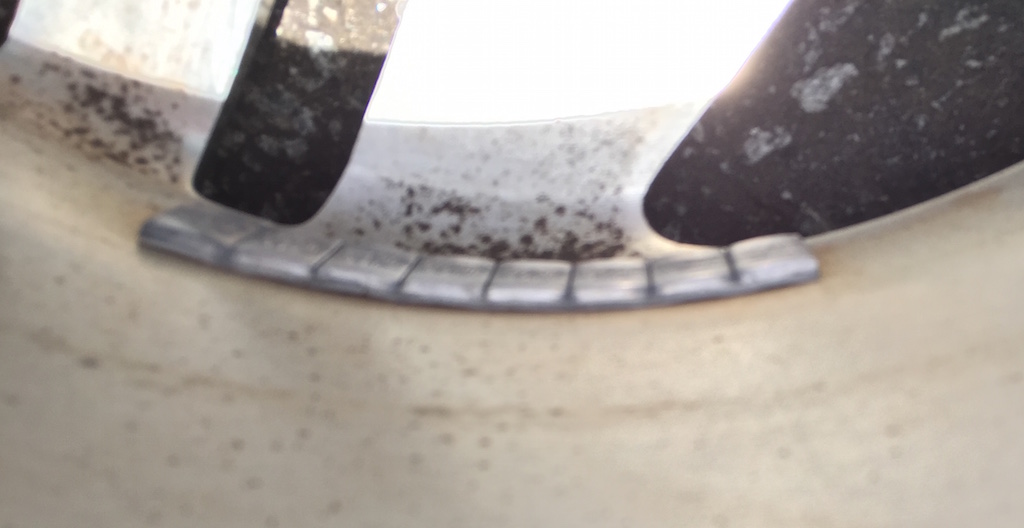 A strip of eight individual weights and wait for it… 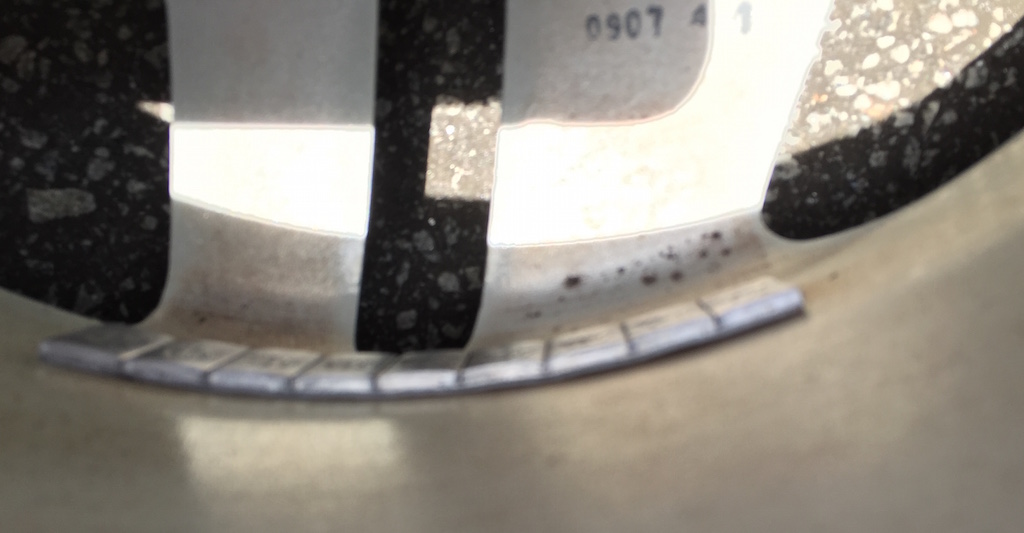 Yep!  Nine weights on this wheel.  Nice surprise.  It is hard to tell from these photos, but they put so many weights without separating them that the curvature of the wheel makes each slice “bind” between weights.  What happens then is the outside of the strip (on either side) does not have a very good adhesion against the wheel. 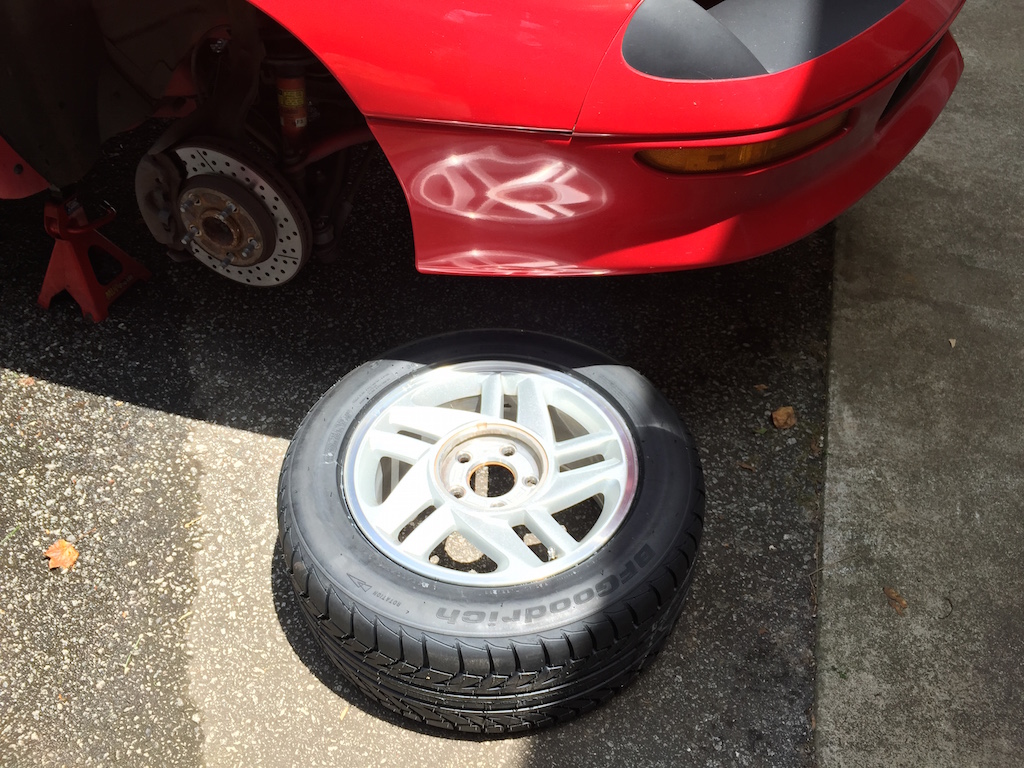 Once I did all my cleanup work the only thing left was to mount and properly torque each wheel back on the car.  So once the Camaro was off jack stands, I had one more last check to make before I called the job done:  check tire pressures.  You would think all four tires would have been if not equally inflated, at least close. 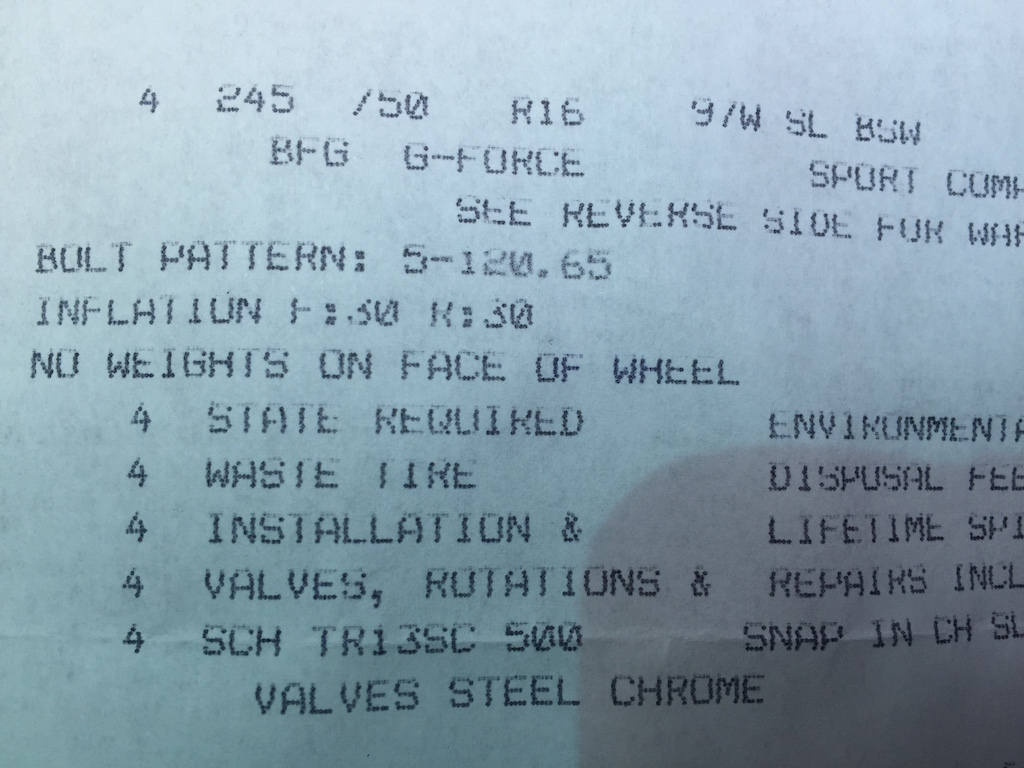 So, for the last surprise of the day, you guessed it:  tire pressures were all over the place.  Funny though, because the work-order sheet (see above) clearly states 30 lbs as the recommended inflation.  Hmmm….

By this time, I was a little annoyed.  I called the store and asked to speak to the manager.  The fellow answering the phone said I was talking to the right man, so I explained the issues in a calm and detailed way.  He listened quietly as I went through my laundry list of issues.  When it was time for him to respond, the gave me very short and trite answers:

There was no point in arguing with this fellow.  I did point out two things:

I ended the phone call by telling the store manager I felt I had been given a sub-par install on the tires.  In fairness, he did offer to spin balance the tires again however I would have to make an “appointment” to have that done.  I politely declined and told him this should have been done right the first time.

When I’ve bought tires mail order, I’ve used a small local independent garage.  They have always done a good job albeit a little on the expensive side.  I regret not using them this time.  So the next time you go buy tires at a big tire store, just remember to double check their work.  Better yet, mail order your tires and have a local garage do the work.