This is the 2016 Chevrolet Malibu rental I drove last week while I visited New Mexico and later, Colorado.  Big whoop, right?  Why on Earth would I write an entry about of all things, a rental car?

So lets start at the beginning…  Wifey had a business trip to tend do, and like cheap luggage I tagged along.  We picked up the Malibu at the Albuquerque International Sunport (ABQ) and much to my surprise the car had barely 79 miles on the digital odometer.  During the span of the next 5 days, I managed to put a tad over 800 miles on the Malibu.  The more I drove it, the more perplexed I became about this car.

The Good, Bad and Ugly

Like I said before, the car had barely 79 miles when I picked it up from one of those national car rental outfits.  I almost felt bad knowing we would be traveling such a long distance and I would not give the car a proper gingerly “break in” period.  However, I did ensured to “refrain from hard stops for the first 500 miles”, but still…  I don’t get to drive brand new cars that often so driving a car with only 79 miles on the odometer was a treat.  But, I digress. 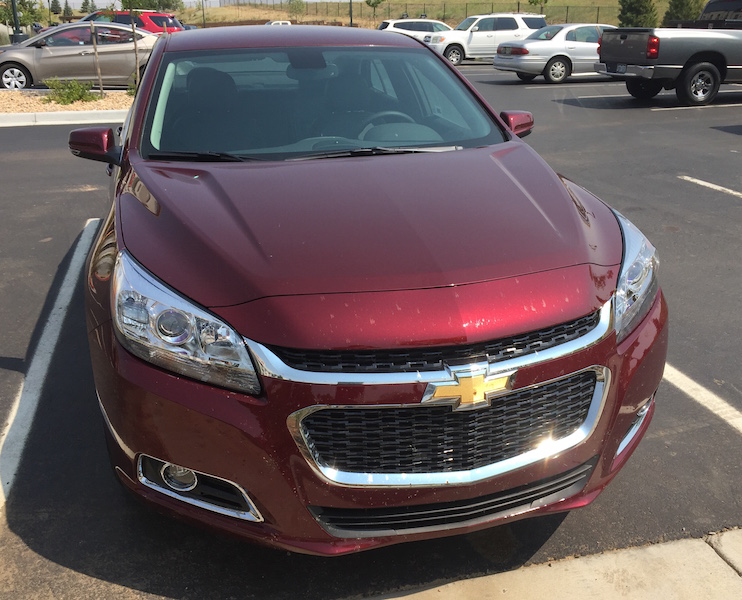 The Detroit engineers at GM World Headquarters have done well:  for a mid-size entry-level car, this particular model is well equipped.  I must say the interior of the Malibu is very nice (all things considered), comfortable and quiet.  Seats came in a dark gray “leather” with power-this and power-that featuring lumbar support.  Included in the package, a nicely appointed touch screen and stereo with USB and all that.  Given I drive “old” cars – bowtie6, Z28 and S2K are 42, 20 and 12 years old respectively – driving a car with modern amenities like the ones described is a bit of a novelty for me.  The trunk was very spacious, with a split rear seat back that folded 60-40%.  Finally, as cheap used-car salesmen say, the car had “Cold Air”.  Boy was the AC cold!!!

The center console in this mid-size car features the defacto necessities of modern-day Americana:  two cup holders, two cell phone slots and an arm rest with a hidden USB port and 12-volt charger.  All four doors included a molded recess just big enough and angled just-so to firmly hold a water bottle.  Finally, by flipping a button, the touch-screen opened revealing another compartment suited perfectly for storing sunglasses.  How convenient is that?

Saving the best for last, the Malibu came equipped with a direct-injected 2.5 Liter four-cylinder Ecotec engine.  Power from the Ecotec gets delivered to the front 18″ wheels via a smooth-as-silk six-speed automatic gearbox.  Suffice to say, this car is very quiet and given what it is, very comfortable. 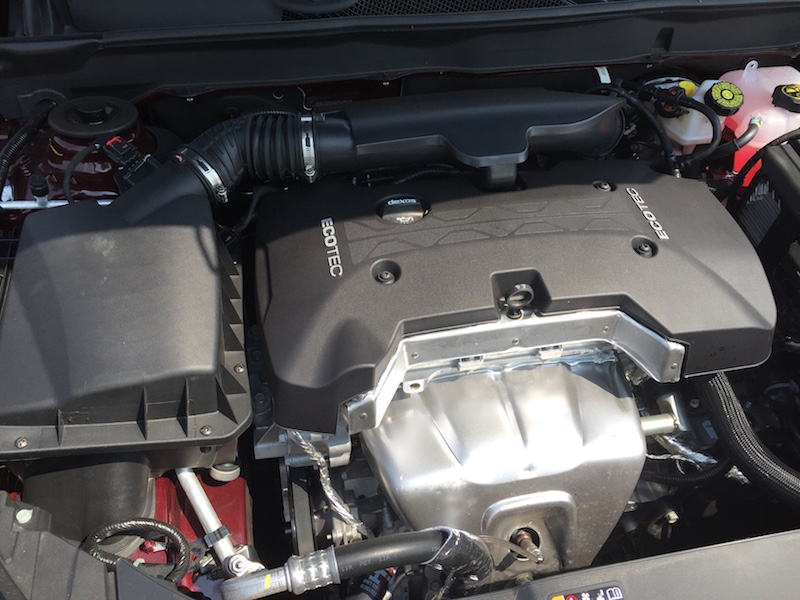 And so, here is the 2.5 Liter Ecotec.  I am very fond of Ecotec engines.  After all, bowtie6 is powered by an earlier ancestor of this particular engine.  I had great expectations but unfortunately this is where this 2016 Chevrolet Malibu fails miserably.

As it turns out, this particular 2016 Chevrolet Malibu came equipped with the dreadful “Automatic Start-Stop System” (I’ll refer to it as the ASS system).  And believe me, this is probably the most moronic and most annoying “features” offered. 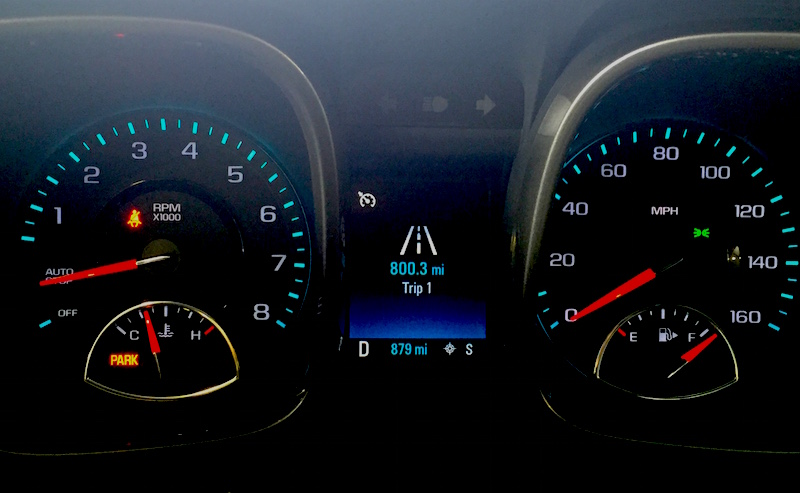 So what is this ASS system?  In a nutshell, it is a fuel-saving feature that when conditions are right, shuts the engine off when the automobile comes to a stop.  I won’t go into the entire explanation, but by clicking HERE you can read all about how it works.  Suffice to say, I found this “feature” most annoying.  It is very disconcerting to come to a stop light and have the engine come to a full stop.  Granted, the second battery keeps all lights and gizmos fully operational but damn, it sucks.  It sucks HARD.

Once the brake pedal is released the engine suddenly re-starts.  I noticed there was very little lag time, however I did not have much confidence in this system especially when one must pull out into traffic at the drop of the hat.  It made me wonder:  while the car is new, the system re-starts very quickly but what will this be like when the car has 50,000+ miles on the clock?

Another thing I disliked very much about this Malibu is the mismatch of engine displacement/power to the size of the car.  There were many times on the open road under cruise control and traveling at 75 miles per hour, the gearbox would shift down to 5th, 4th and yes, even 3rd gear when encountering grades.  All this in the name of “economy”. 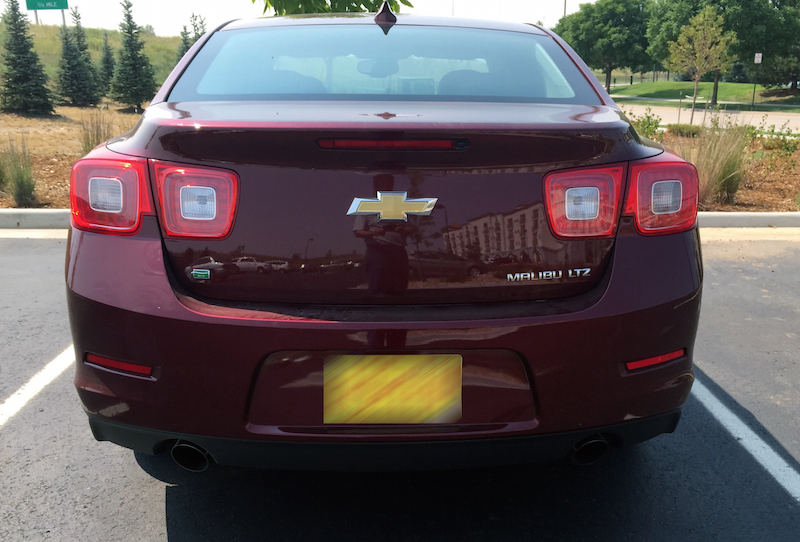 In all honesty though, this car achieved 35 miles per gallon while traveling on average at 75 miles per hour and having the air conditioner on.  Not bad.  However to do this, one has to give up all performance.  Don’t take me wrong, I don’t expect Corvette power here but having a car shift through half its gears while going up an incline is pretty hard to take.  I also did not find this car very sure-footed with the “pedal to the metal” when attempting to merge into traffic on a freeway.  This is sadly, a very neutered automobile performance wise.

The latter part of out trip was used to pick up my nephew at the Denver Airport so we could take him to Ft Collins, CO in time for him to move into his dorm at Colorado State University.  While we were there, we did some shopping.  Among the things he wanted was one of those clip-on reading lamps so he could have something to illuminate his reading materials.  We stopped at a local Home Depot and purchased the clip-on lamp along with some 60 watt incandescent bulbs.  My nephew preferred those bulbs because they provided a warm light as opposed to the harsh light from an LED.

Funny thing was that when we checked out, the fellow behind the counter gave me plenty grief by pushing LED bulbs vs incandescent.  He insisted I buy the LED bulb because it was “more efficient”.  I resisted equally as strong stating my mind was made up and we wanted the incandescent bulb.  He did not back off!  Eventually I gave him a harsh look and finally he backed off.

And so, in a way, I feel very similar to this exchange when having to deal with the ASS system.  Somebody shoving “economy” down my throat.  What is worse, the ASS system in the Malibu did not have a disable button on it.  Granted this is an optional feature but from what I’ve read, this will become the norm in the not too distant future.

Sad actually – yet another freedom we have lost to in our “politically correct” and “environmentally friendly” society.