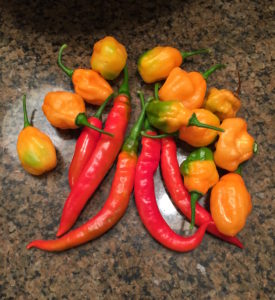 Red-hots and habanero peppers from my garden

After a summer sabbatical of sorts, I’m back.  I have not forgotten about my blog, instead for some reason the spark to write has not been there so I decided on some time off.  I know, it’s not like I have a huge following – so who cares, right?

During my time off the F1 boys took their summer break, and have returned to the second half of the season (should be exciting – Lewis or Nico?)…  The whole entity of F1 is in the works of changing ownership…  The English Premier League is back and Manchester City has started a fine season undefeated (so far)…  I just hope the change of leadership for F1 is as good as it has been (so far) for MCFC (time will tell)…

And last but not least… We find ourselves on the eve of the first of the “debates” that will showcase the best that our two major political parties label as “presidential candidates” (yeah right) which incidentally, isn’t much – scary shit indeed.

Goodies from my Garden

Today’s post tells the story of my latest “experiment”:  as you can see in the featured photo it shows just a small sampling of this year’s bumper crop of hot peppers from my little garden.  My garden is not elaborate, just a couple of planter boxes with some good soil and several tomato plants with some habaneros peppers, red-hot’s, Tabasco brand peppers and serranos for good measure. 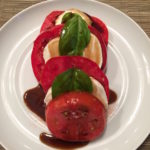 The tomato plants consist of three Roma tomato plants which have produced some awesome tomatoes for pasta sauces (Wifey has made some amazing dishes with the Romas!) and two other plants yielded some great tomatoes suitable for awesome Caprese salads with my own grown basil. 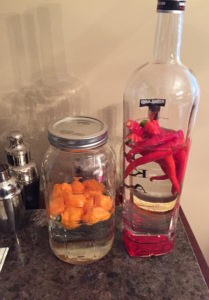 So back to the hot peppers…  Many years ago, I lived in Aiken SC.  Not far from Aiken is “The Garden City”, the home of The National: Augusta GA.  One of the specialties of one of my favorite restaurants in Augusta is a “Cajun martini”.  Their trick was to let hot peppers infuse in vodka.  So, I went to Costco and purchased some Kirkland brand vodka – the bottle said it is made in France but the price was good so I figured why not.

Half the bottle of vodka went into a Mason jar and I added the habaneros.  The rest of the vodka remained in the tall bottle (pictured left) and I added the red-hots in there.  After a couple of days, I took a whiff – yikes!  Good stuff!  Today, I poured the liquid in some saved bottles and placed them in the freezer.  I’ll add a post later with taste results. 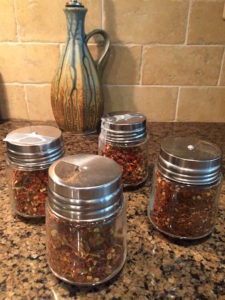 Finally, my friend Thom was kind enough to take several Ziplock bags full of my hot peppers and prepare them in his food dehydrator.  And of course, I now need to shop for a dehydrator – so if you have any recommendations please let me know in the Comments section at the end of today’s post.  Amazing thing these pepper flakes!

I’ve been adding this extra condiment to pretty much everything!  The heat is not unbearably toxic, instead it is very tasty indeed but not for the faint-of-heart.  One thing though:  even after being dried and chopped the fumes are still there.  I’ve had several episodes of sneezing during dispensation.

Several of my friends at work have been telling me about their Nestthermostats and how much they like them.  I’ve stayed away from the Nest devices because they are a) rather pricey and b) I already had a programmable thermostat.  But, I decided to do some research…

As it turned out, Nest had price reduction this summer and I took the plunge.  Against my better judgement, I ordered a thermostat from the Nest website rather than from Amazon.  Yes, I would have received it free of shipping charges and with 2 day delivery, since I have Prime but I figured I’d order from the factory, and hopefully get a latest version of the thermostat.

This order was doomed from the start.  It appears that there must have been many folks just like me on the fence about the price and they too, ordered thermostats taking advantage of the price reduction.  After a couple of weeks I started calling Nest customer service and as expected the other side of the phone call was answered in some foreign land with reps that have a very poor command of the English language.  Eventually after many attempts, I finally spoke with someone in the continental USA and they explained demand went through the roof and inventory went the opposite direction.  They asked me to be patient and that they would knock off another $25 plus reimburse shipping in return of not cancelling my order.  After a few more days I received my Nest Thermostat.

The device reminded me of unpacking my iPhone and iPad.  The thermostat is exceptionally well made, impeccably packaged and well documented.  It even includes a very nifty screwdriver with a very comfortable handle.  Installation was a breeze and this thing just plain works.   After a “learning” period the thermostat has settled and the one thing that stands out is how constant temperature is maintained.  My old thermostat just did not have this level of accuracy.

The thermostat can be controlled from an iPhone as well as from the device itself.  And I must reiterate the app is very handy.  Now I can control the thermostat away from home and best off all Wifey has the app too – so she can adjust the device.  Happy Wifey, happy life.

And another cool toy purchased lately was a new Roku 3 device.  With all the awesome content available for streaming I figured I’d give one of these a try.  This time I did order from Amazon at a good price and in 2 days I had the device at my doorstep.  The device is really nice and as advertised it powered right up and immediately started working with very little fuss.

Unfortunately due to the way my house is designed the wireless signal did not prove to be strong enough for the Roku.  I don’t have any issues with my other devices (even the Nest thermostat) but for some reason the Roku just could not lock in a strong enough signal.  So, I crawled under the house and ran a physical wire between the router to a switch that allowed me to finally hard wire the TV, the Roku and the DirecTV receiver.  Amazing how well all this works with a wired signal.

Streaming is awesome.  So much available content and all with flawless performance.  A real gem this Roku device has turned out to be.  My favorites so far:

And I guess I have tried to cram way too much in today’s post.  Sorry about that…