Headed out to LAX last Saturday for a much needed week of R&R.  The missus and I arrived at LAX, secured a rental and headed out of town.  Sorry but big cities are not my speed.  Instead we are headed to wine country. 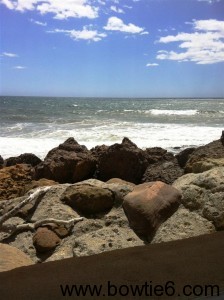 Thanks to the good folks at Delta, we were quite hungry upon arrival (the stuff they call “food” is for crap – but that is another story).  At any rate, once on Highway 1 outside of LA we happened to find a really good place to eat.  The photo at the left is out view from out nice table.

Once we got a chance to have  a warm lunch we hopped back in the rental and headed to our next destination:  Ojai, CA.

Along the way on Hwy1, we had a chance to see a crapload of Ferrari’s, Aston Martins and Bentleys.  Lucky f%$#r’s!!  Also along the bike lanes many dudes in TRI bikes – looks like Cervelo is very popular in this neck of the woods.

Later in the afternoon we arrive in Ojai, CA.  What a great little town.  Had some great food and on Sunday we headed out to pay our respects to The Great Communicator.  If you ever have a chance to visit the Ronald Regan Presidential Library, don’t miss it.  In a time when we desperately need a true leader, this place was very special to me. 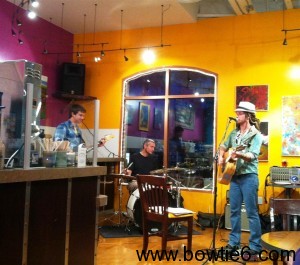 After dinner on Sunday night, the missus and I took a leisurely walk down the main drag in Ojai.  We found a small coffee shop, inside were the owners, three customers and this trio.  We bought our coffees and sat down to listen.  So we sit down and they start playing Ramblin Man.  Only in California.  I almost asked for the iconic “Freebird”, but decided to just enjoy my coffee and let the boys play.  We ended up staying there about an hour! 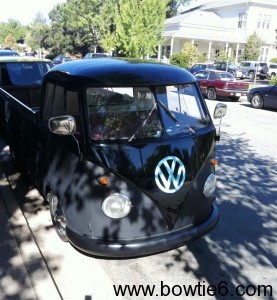 This morning on the way to a little pastry shop, I happened to catch the following bad ride.  Wow!  It was a VW “pickup”.  It belonged to a local dude, doing some repair work.  I guess if you are going to do your “thang”, might as well do it in style.  This is what the vee-dub looked like from the front.  The paint was layed down flat black with a very tastefully done gloss to highlight the reveals on the bodywork.  The “VW” emblem was done in a very nice light blue.  Porsche hubcaps were on the wheels – which made it look really cool.  This bad boy was slammed on the ground too! 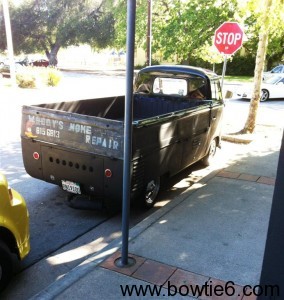 After a very tasty pastry we headed out towards Carpinteria, CA.  That was a very nice drive – only wish I had been driving bowtie6!  There was a very nice road with plenty of twisties and some awesome views.  Once past Carpinteria we headed towards HWY 101 and proceeded towards Santa Barbara and eventually to Los Olivos.  In Los Olivos we found a quite a nice variety of wine tastings and of course we had to partake!  While there we found a little local restaurant that just decided to open its doors to the public on this Monday, April 16.  Food was great!!! 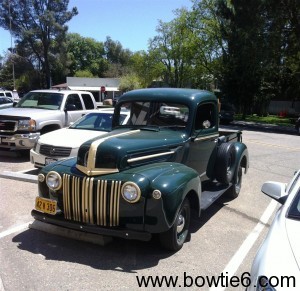 And while we are having lunch, this bad boy pulls up and parks in front of the little restaurant.  Only in California.  Folks here just seem to have a different appreciation for old cars.  As I have been driving I can’t tell you the amount of vintage classic Detroit’s finest I’ve seen along the way.

Today we arrived at Arroyo Grande.  The missus secured an awesome B&B and we pretty much have it to ourselves.  It has an astonishingly fantastic view and could not be any better.  For dinner tonight we went downtown Arroyo Grande and found a great outdoor cafe where we just admired the cars going past.  And of all things, we saw a very nice Pimento Red TR6 go by several times. Good times.

2 thoughts on “On Vacation: California”