For the past few years, I have been planting a small garden in my back yard.  I started with a small planter box and through the years, i’ve added three more.  I don’t get too elaborate, mainly eggplant, tomatoes, zucchini, squash, herbs and a few hot pepper plants.

This year, thanks to Covid the majority of the plants came from Burpee – they were shipped a little late because everybody in America decided on planting a garden but it was all good. The Burpee plants did very well, but I still needed my hot peppers.  The peppers came from Lowe’s, where I bought one Habanero pepper plant, one Tabasco pepper plant and one Havasu pepper plant. 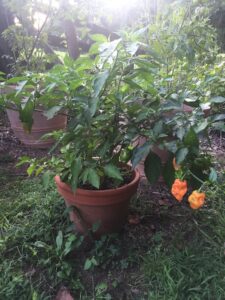 One of my favorite hot peppers are Habaneros – they are hot as hell and they really make you feel alive when you cut one up and added to some salsa or eat it in tiny bites.  This year, I planted my Habanero plant in a small pot, with some fresh potting soil.  This little plant has been awesome:  I’ve picked dozens of peppers and they are especially hot.

But, what to do with a bountiful harvest of Habanero peppers?  Well, the answer is Habanero Jam. I found a great Habanero Pepper Jam recipe that really works.  I won’t go into all the details because they have already been covered in that link – but suffice to say, the result is amazing.  The Habanero pepper jam comes out with plenty of kick.  Very satisfying, just hot enough to make you come back for more.  So far, i’ve made three batches.  The first two batches I made according to the recipe but I deviated a bit on batch number three.

The “base” recipe yields four 8-ounce Mason jars of goodness.  You will have a little bit extra, enough to be used the day you make the batch.  The recipe calls for 1/2 pound of Habanero peppers – about 15-20 peppers depending on size. 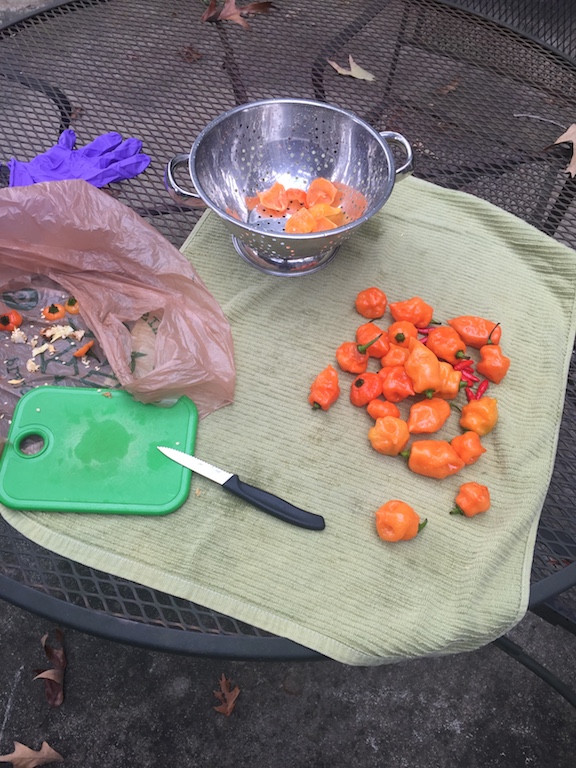 But first, some words of CAUTION.  Habaneros are weapons-grade peppers.  You must handle them with care, in a well ventilated area.  I cut mine in the patio, wearing disposable gloves.  The peppers must be cut and cleaned before cooking – I removed all seeds as well as the inside membrane.

To make things exciting, I’ve added a handful of Tabasco peppers.  You can see in the picture above, the little red peppers.  These peppers don’t have the kick of the Habaneros, but they are quite hot.  I also removed the seeds by cutting the tip and pushing them out.  Basically, they add a little red to the end result.

And finally, I added three Havasu peppers.  These peppers taste like bell peppers but have a small kick of heat.  They add color as well. 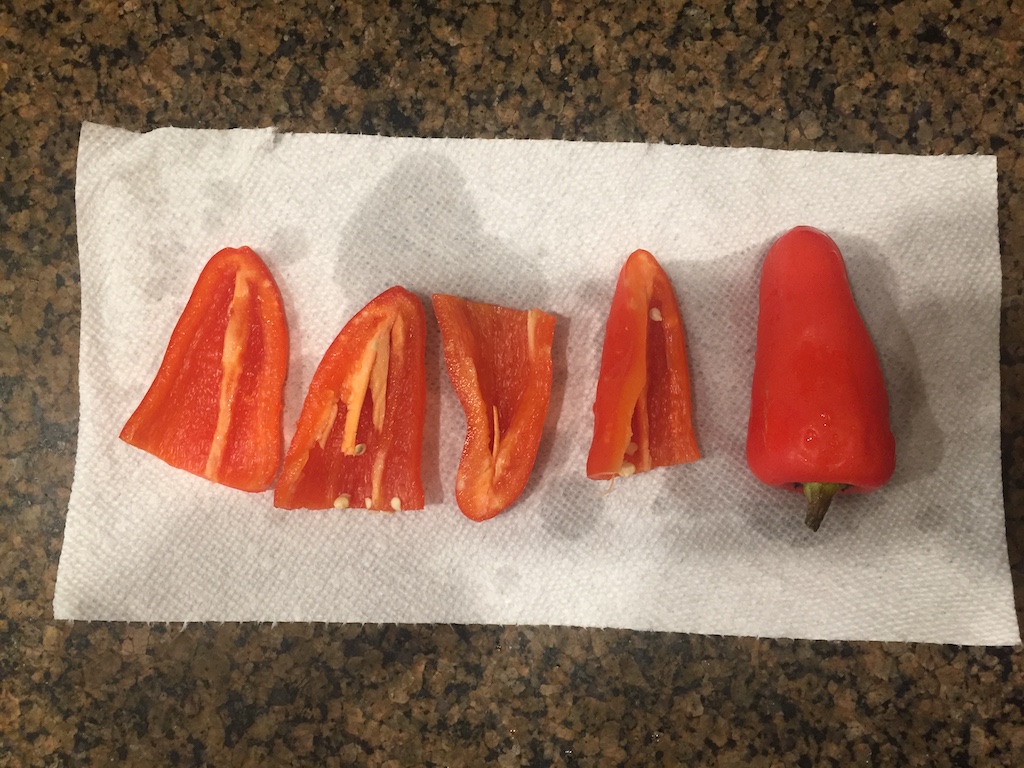 I added one more ingredient to today’s mix.  A couple of nice mangoes… 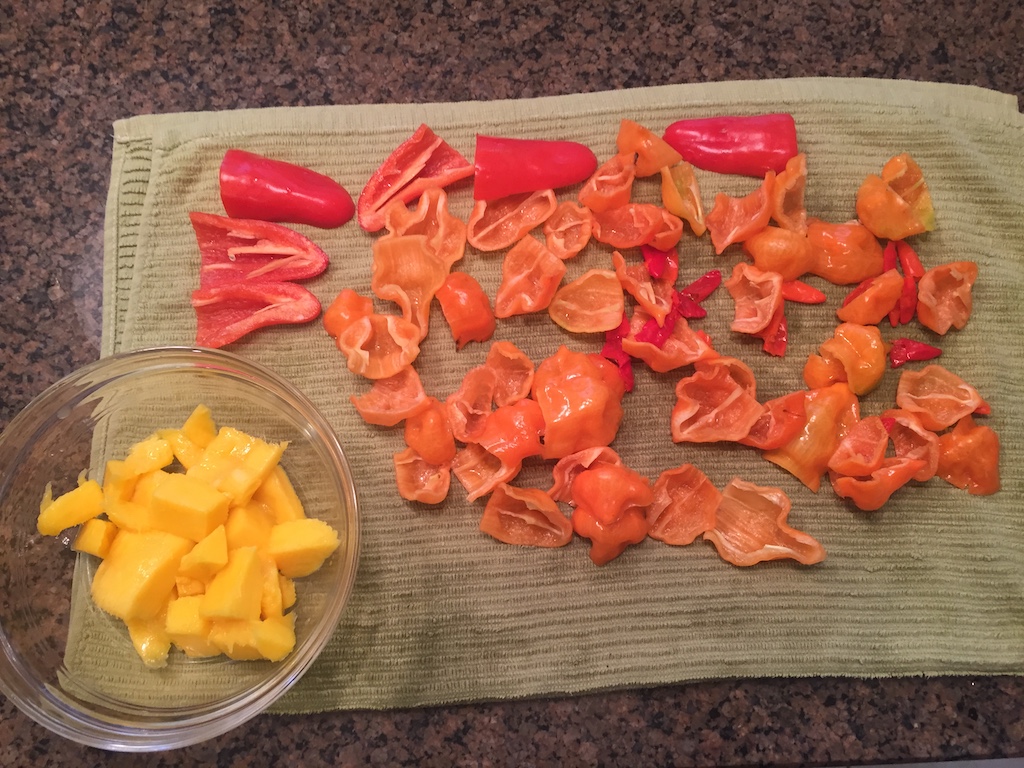 All this goes in a food processor and that gets pulsed a few times until you have a smooth consistency.  Again CAUTION:  the fumes after processing the peppers can take your breath away – just be careful.  This mixture is potent! 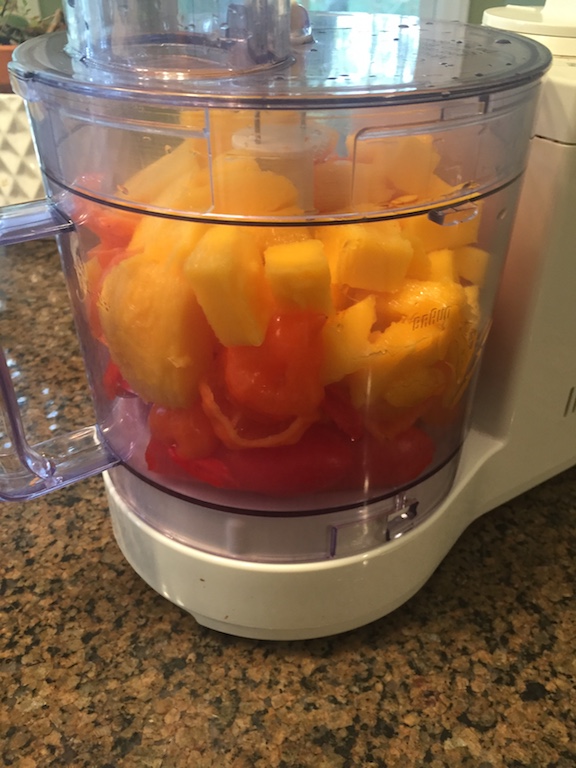 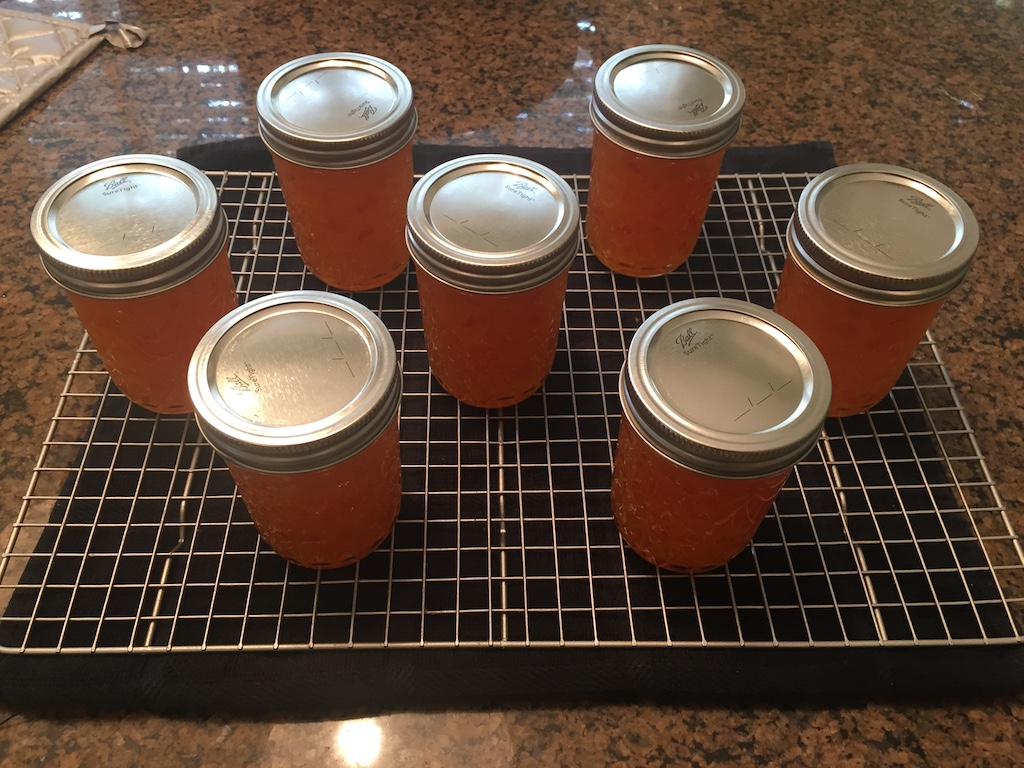 Adding the two mangos increased the yield – this time I got 7 jars instead of just 4.  It also gave the jam a fuller body.  Adding the mango turned out just great!

I’ve tried the jam on baked salmon – it was awesome.  Also tried it on a pork chop and it was really good.  Finally, take a Ritz cracker, add a little bit of cream cheese and top it off with Habanero jam, for a real treat. 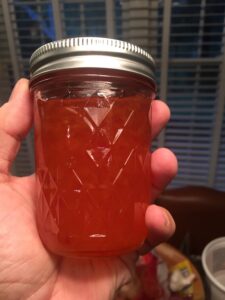 Finally, one last trick:  Once the Mason jar lids “pop”, start turning the jars end over end a few times.  Do this until the jam sets up and it will ensure an even distribution of the contents.  Otherwise, the bits will tend to float to the top.

All that is left, is enjoy!

As always, hope all is well with you during these weird times.  Be safe!