In an earlier post, I described bowtie6‘s frame failure.  Today, I have some pictures of the “issue”.  First, a little background… 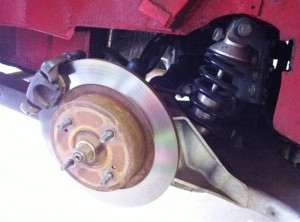 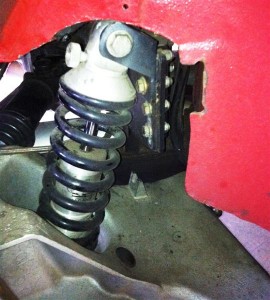 Since a bigger engine was to be installed, we reconfigured the rear suspension.  A completely redesigned mount was made to hold the Nissan R200 differential as well as the coilovers that would replace the lever action shocks and springs.

The pictures on the right show the rear suspension from the passenger’s side.  You can see the coilovers, rear disc brakes and the suspension mount holding the top coilover perch.

This brings us to the following photo gallery showing the frame damage.  The frame rail has suffered a serious, unrepairable stress crack.  I have inspected the driver’s side and there too, I can see a stress fracture although it is not as severe as the one on the passenger’s side. 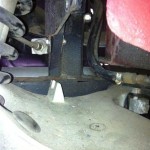 Stress crack on the frame rail 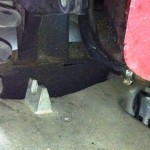 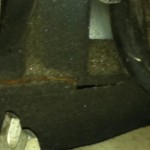 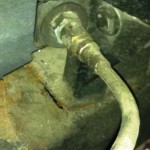 I’m sure there will be plenty of critics analyzing the frame failure from these pictures and coming up with all kinds of root causes for the failure.  Quite frankly, the thing is what it is.  I got 15,000 from what I thought was a very good frame but this endevour has proven to be more than this frame could handle.  The extra power the engine gained from the cam and head work plus the stress of getting hammered by the control arms caused the frame to eventually expire.  Since the rear failed this extensively, I have reason to believe other parts of the frame have also suffered stress.

As soon as the frame comes out again to see the light of day, I plan to do a full autopsy by cutting it up and documenting stress points, failure points and basically show where the frame held up and where it did not.  I’ll have that in a future article which should be very interesting to read.

And now for a little reflecting…

These frames are now 35-40 years old.  These frames are also marginal at best.  Sure, with the anemic tractor engine on the stock TR6 the frame will probably last, but not by much.   However, if anyone is thinking of adding any real horsepower then really think what you are planning to do.  These frames can be reinforced to hell and back (done that), boxed-in (done that), have gussets added (done that) and have every weld reinforced (done that), and yet they will fail.  Quite frankly, I am very happy this thing gave up the ghost – now a new frame is being built to last and handle the new ECOTEC engine with no “issues”.