After nearly 25,000 miles on bowtie6 and countless number of rebounds the rear coilovers finally gave up the ghost; time for coilover repair.  In order to get them apart, I had to do a partial rear suspension tear down.  My cousin Jim designed all the mounts so they could be easily disassembled – “…remember, everything will eventually be replaced or serviced at one point or another”, he says; “…it doesn’t matter how nice it looks or how great it performs, if it is not easy to disassemble and put back together, it isn’t worth a damn!”.  Wise man, my cousin Jim.

END_OF_DOCUMENT_TOKEN_TO_BE_REPLACED

2400 miles driven and one of the two rear axle wheel bearings has failed on a sub 2500lb car.  Sad shape of affairs this is indeed.

Fist off, the wheel bearing in question has the SKF name all over it; made in of all places, China.  I have a problem with offshoring and a bigger problem when the offshored goods are defective.  QA was definitely not in the picture when this bearing was made.  And no, this is not the first one to fail.  My cousin Jim Thompson’s TR4 had the exact same thing happen on an identical rear axle as used on bowtie6.

So what is all this fuss about?  Let me show you.  After lifting the rear of my TR6 up in the air, we were able to determine the driver’s side axle bearing was at fault.  I took the caliper off, then the rotor and the retainer plate off the rear housing.  A couple of strikes with a deadblow hammer and the axle was out.  This is what it looks like: 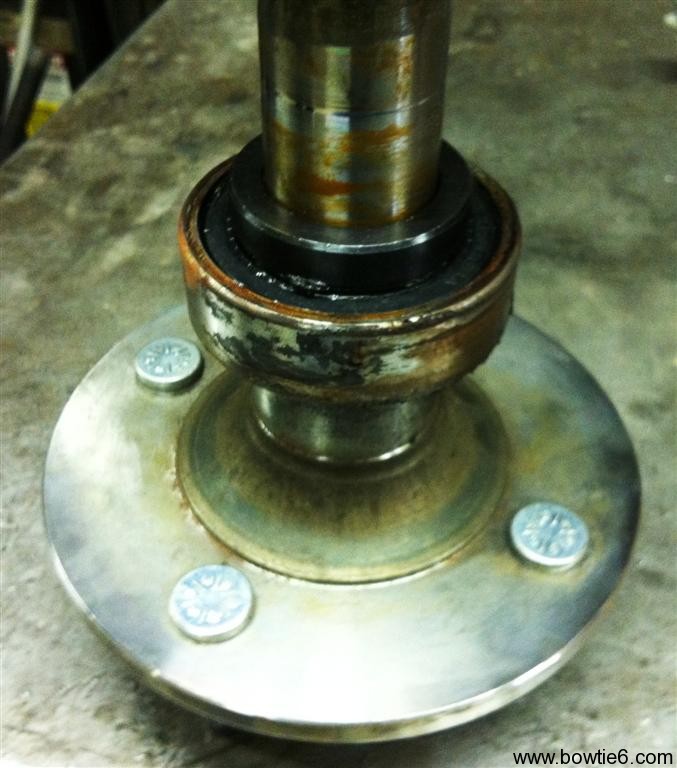 The picture above shows the bearing and on top of it the retaining ring.  In order to minimize damage to the axle, the bearing is cut as follows: 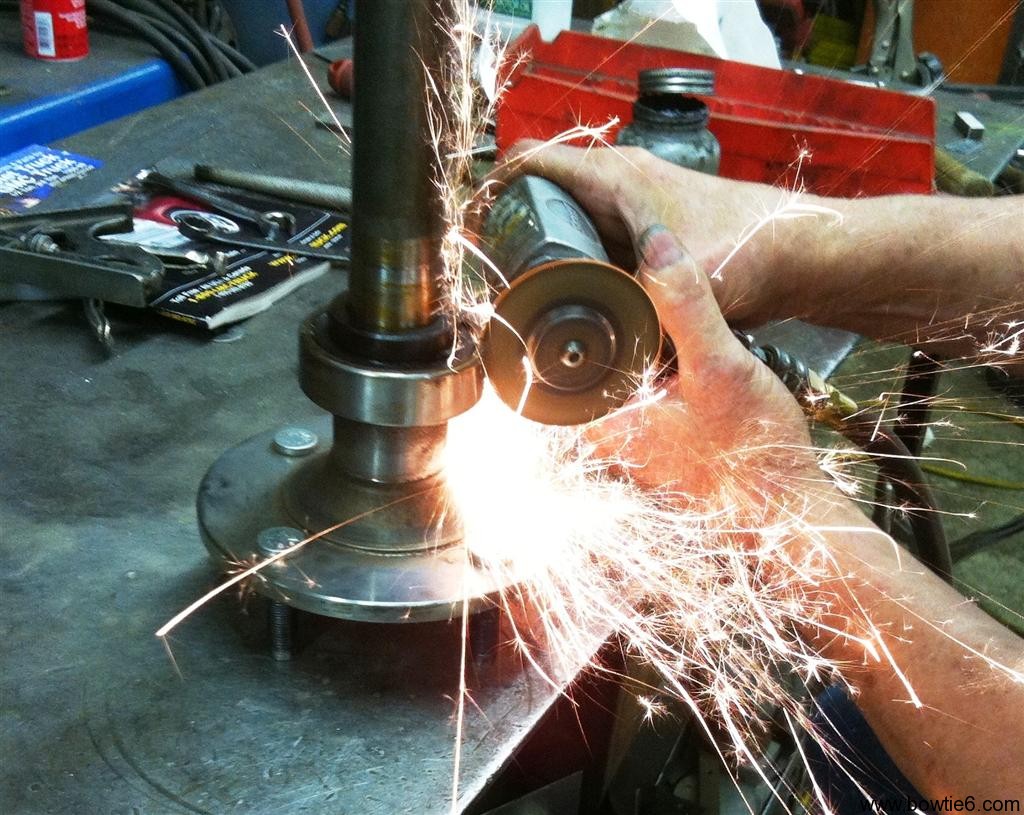 And once the outside race “pops” (it is under tension and cutting the outside race eventually makes a muffled “pop”), we get a chance to see inside.  This is where things get very interesting: 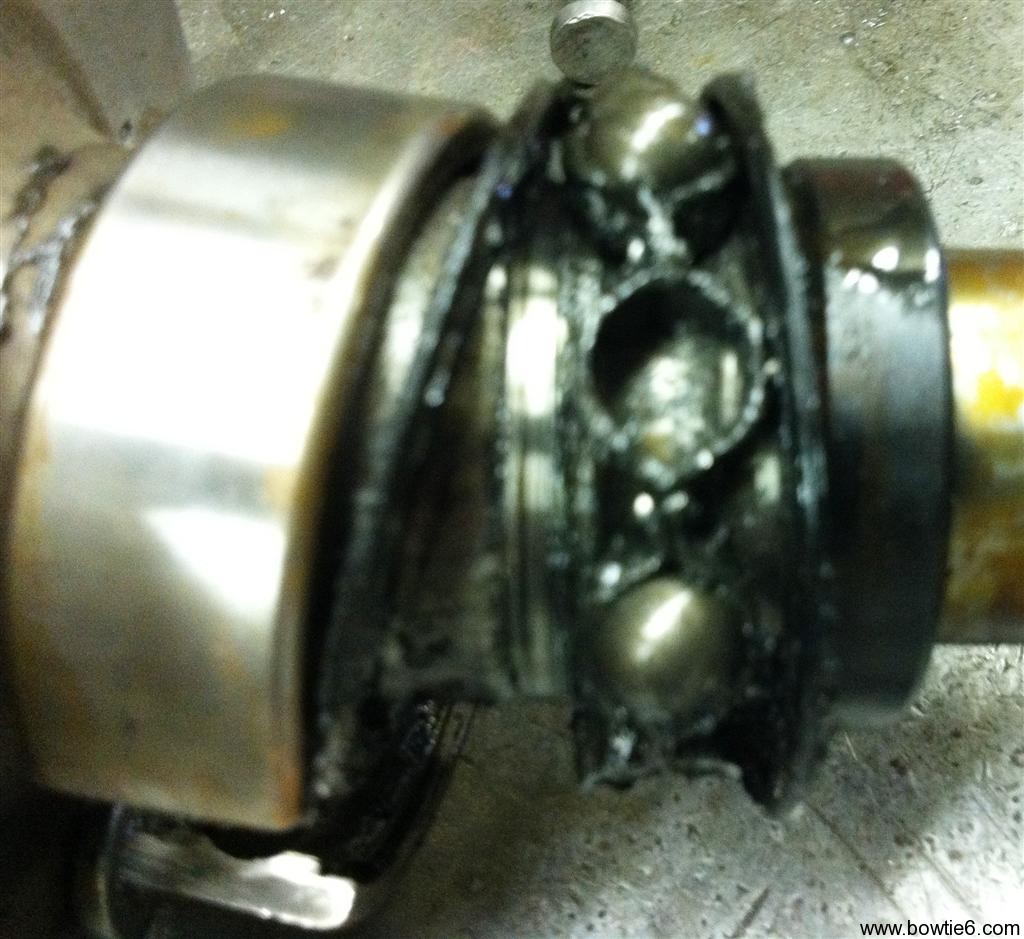 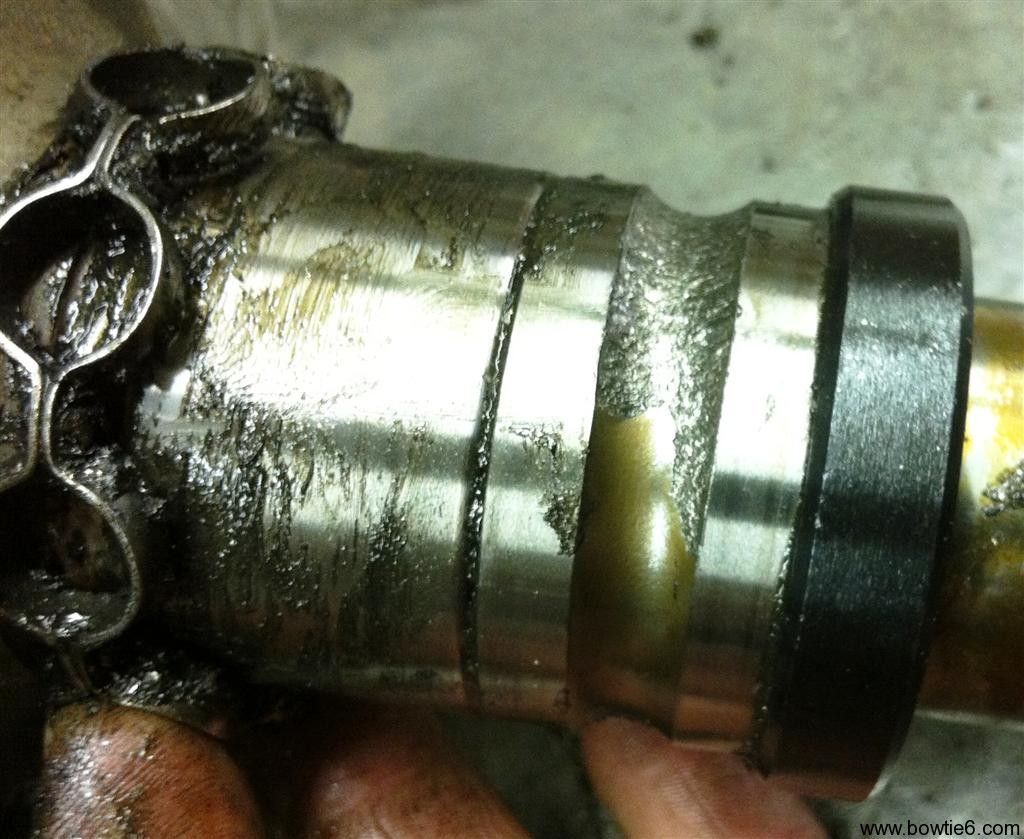 Here we start to see the root cause of the problem.  The inside race should be slick, polished and accurately ground.  Look at the photo above: the lower half is indeed properly hardened and finished.  However, see the top half?  It looks very rough indeed.  That is where the racket was coming from.  Another couple of pictures: 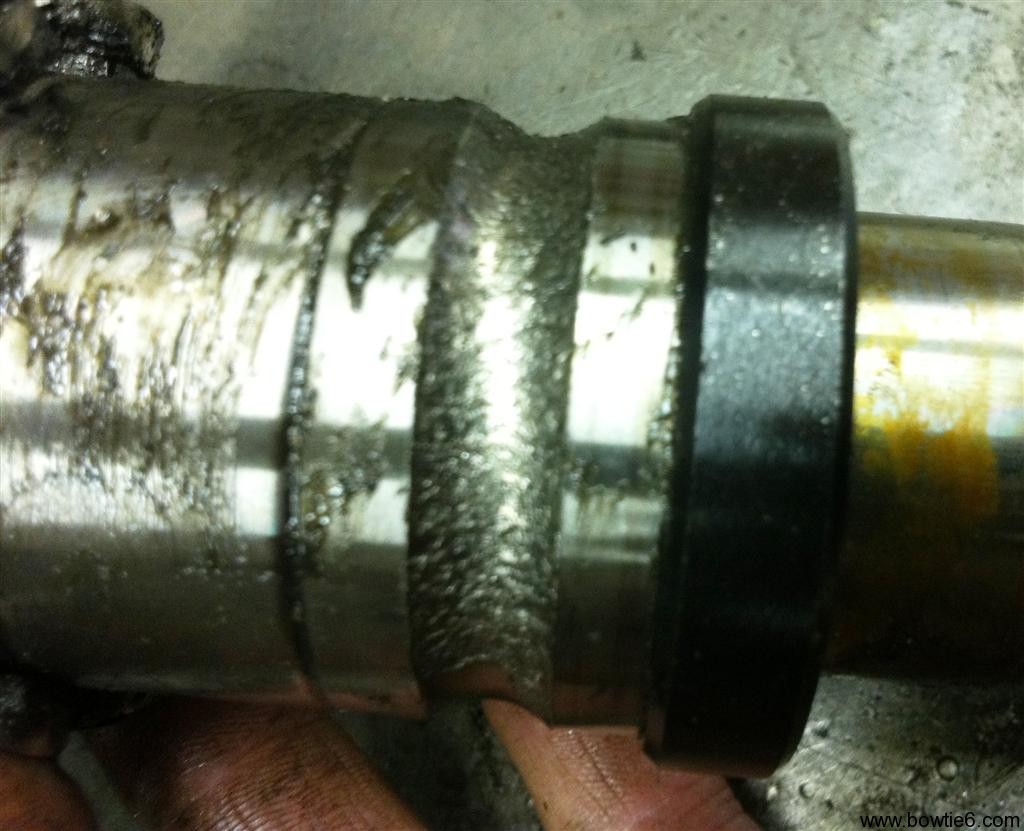 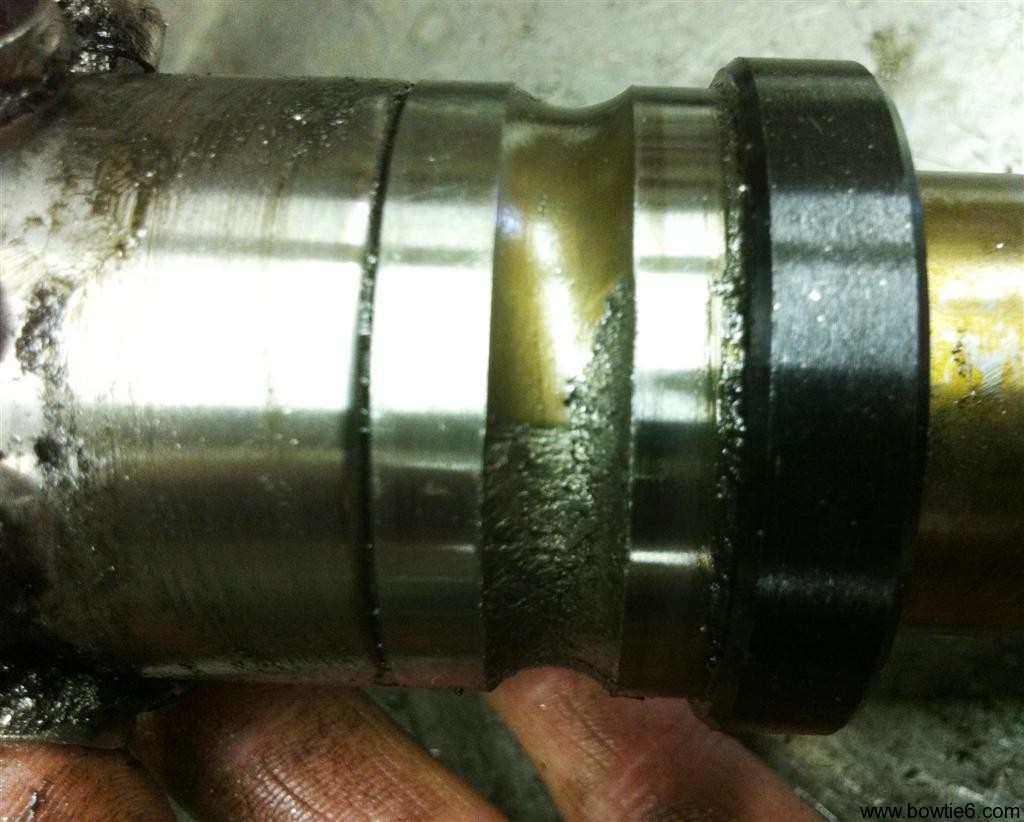 Further inspection revealed the outside race was in good shape.  No case-hardening issues there.  However, the inner race was very poorly made – somehow the case-hardening process was not properly applied and the surface of the inside race pitted severely after only 2400 miles.  This cannot be blamed on poor lubrication because these are sealed bearings.

A new bearing has been sourced – unfortunately it is SKF.  I just hope I’m not here in another 2500 miles talking about another bad apple.  Here is a photo of the new bearing being pressed in: 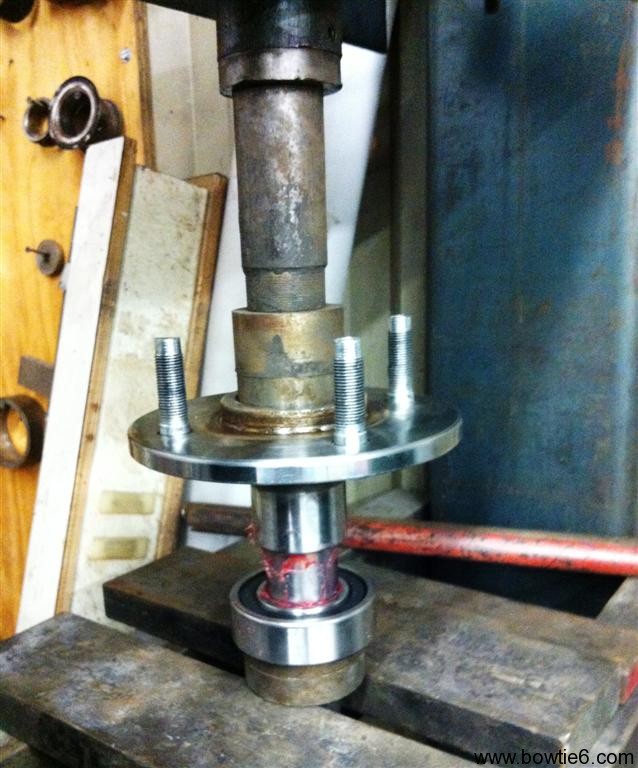 Once I got the axle back in the housing and bolted it all back together we were set to go.  I put about 50 miles this afternoon and all is good.  I just keep my fingers crossed the new bearing lasts a little longer.

I’ve spent some time lately tweaking the coilovers in bowtie6.  Part of the fun of doing a conversion like this is debugging issues and improving the original design.  This is not because we didn’t do our homework.  Instead, once you get things running certain assumptions turn out different once exposed to the “real world” experience.  The coilovers are no exception.

Ever since I started talking about coilovers on bowtie6 both here in the blog and at car shows, I’ve been asked what coil rates I have used.  Folks ask me this expecting a straight answer but unfortunately there is no such thing!  This is a trial and error process that is highly dependent on factors such as suspension travel,  weight distribution and mounting angles of the coilovers – among others.

So when we put things on paper we factored fore and aft weight distribution and a general notion of the coilover mounting angles.  The best placement for a coilover is to mount them straight up.  At this angle the coil rating is 100%; the more tilted the less efficient the coil works.  However, it is very hard to get the coils straight up especially when you have “A” arms or the body in the way.  So this becomes a bit of a compromise.

As the suspension settled, I started noticing the front tyres scrubbing on the inside of the front fenders when doing some heavy cornering or when the car settled on a bump under heavy compression.  Not good.  So what to do?  There are several options…

Coils come in a variety of ratings, such as 400lb coils for example.  What this means is that it takes 400lbs to compress the coil an inch.  This illustrates what I mentioned above about mounting efficiency.  The 400lb rating is with the coilover mounted straight up.  With the coilover mounted at a 20 degree angle, you would need a 454lb coil to give you the 400lb rating.

So just run stiffer springs, right?  Well, not really.  One can make the suspension too stiff and when that happens the suspension does not react quick enough to undulations in the road surface.  This can yield to poor handling.

A larger swaybar can be used too.  However one has to be careful with this because with a stiffer swaybar the care will also react in unexpected ways under hard cornering such as oversteer or understeer depending whether a rear sway bar is used.  Careful matching is critical here.

Another idea is to unbolt the body from the frame, make shims and bolt things back up.  Easy on paper but hard to carry out.  This could take a bit of time to figure out  Furthermore, a disadvantage to this approach is that the center of gravity will be affected and once again handling takes a hit.

I am not an expert in this by a long sight, but after talking this over with several folks that know much more about this than I do, we decided on a stiffer set of coils (but not too stiff!).  I placed an order and a few days later (thanks to UPS) the stiffer coils arrived.  After opening the box and making a few measurements things got really interesting…

Turns out the coilover vendor from whom I bought the coilovers a year before, made a huge mistake.  For some reason they screwed up and sent me different length coilovers.  The rears are longer by 0.6 inches.  When my cousin Jim fabricated the frame and designed the mounting points, the calculations were based on the longer of the two pairs.  Thinking they were both the same all looked great on paper.  However, in reality the front ended up short by that 0.6 inch.

At any rate, we ended up upgrading the front coils with the new stiffer ones.  What a difference.  The tire scrub has been solved while retaining good handling.  Another “bug” solved.  Moral of the story?  just because a vender ships something you have ordered and it seems to be “correct” do yourself a favor:  measure and make sure all is correct and up to spec.  Especially on parts that might be not used for quite some time.

We thought about using coilovers up front but the way the original Triumph frame is constructed did not allow for a very good placement.  So instead, I used SPAX shocks with upgraded aftermarket “racing” springs.  This setup worked quite well – but with a huge shortcoming.  What shortcoming?

We all know factory Triumph TR6’s require the dreaded “spring compressor” to take the front suspension apart.  This in itself is not a big deal (provided one uses the correct type of spring compressor), however the constant tension from the spring loads up the front suspension something fierce.  This load forces the driver use great effort when turning the front wheels at parking lot speeds.  What??  Well – until you drive a TR6 with coilovers you will have to take my word for it.  With coilovers, one can turn the steering wheel with very little effort.  Huge difference.  Coilovers also allow the use of different spring rates.  One can tune the suspension to his needs very accurately.  Finally, one can control ride height very nicely with coilovers.

The downside is price.  Good quality, rebuildable coilovers are not cheap.  Sure, one can source coiloves from eBay or some half-quality supplier.  Good ones will run you about $400 a pair.  By the time you order the appropriate springs you can have $1000 a set.  But they are worth it!

The following gallery show some pics of my coilovers mounted on the new frame.  There are some pictures of the front as well as the rear suspension, with the solid axle.  One interesting note:  Take a look at the frame:  there is nothing that hangs below the frame line.

Oh and the coilovers, yes, they perform as nice as they look! 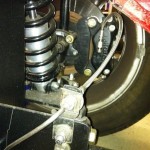 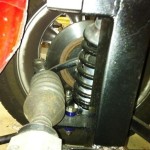 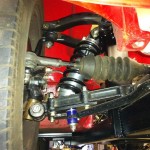 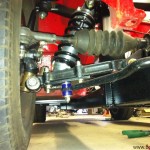 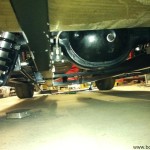 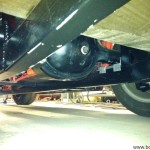 bowtie6’s new frame gets a new differential.  In order to handle the power of the ECOTEC – remember boost is in the plans – we needed something that would not break.  Furthermore, one of my requirements for the new drivetrain is to have full posi-traction (and by this I mean the real deal and not viscous). 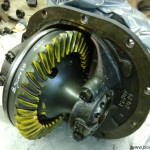 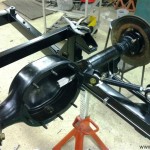 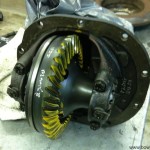 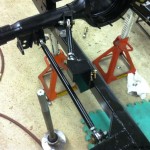 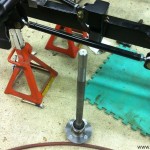 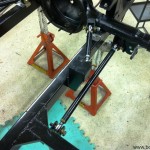 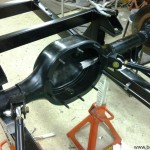 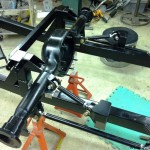 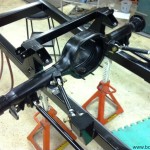