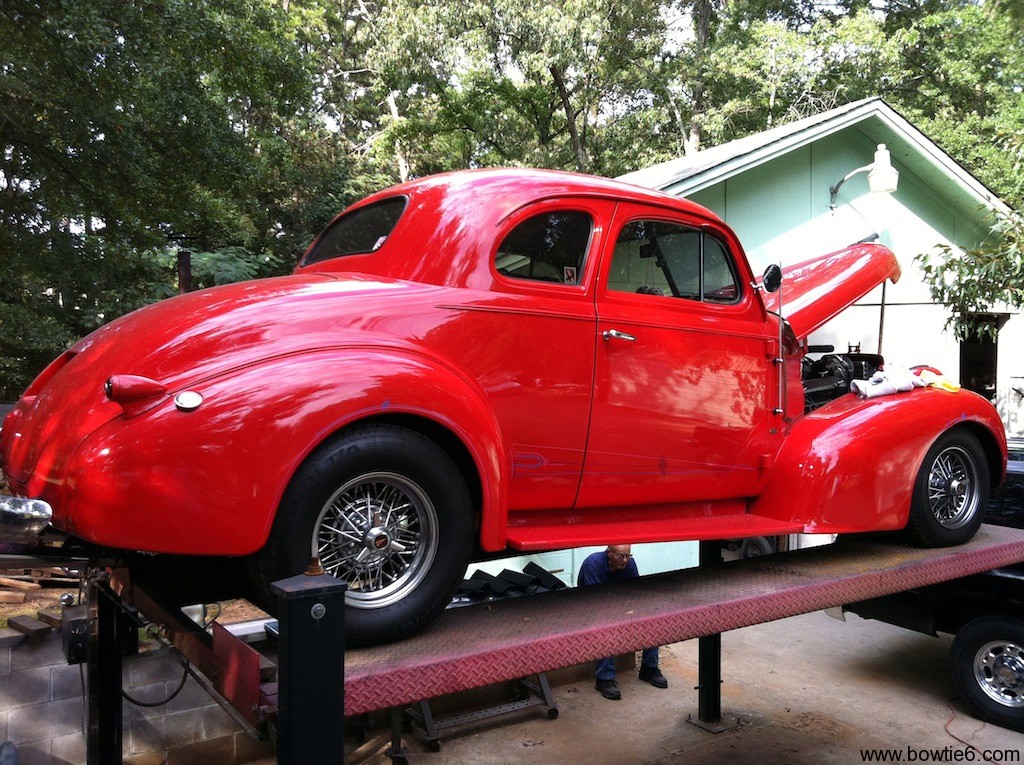 Have you ever stopped at a street light, only to have a custom-built street rod pull up next to you with paint so bright it makes your eyes hurt?  With a “blueprinted” engine built with the highest lift cam available from the Summit catalog, the biggest four barrel made by Holley and with a driver/operator bouncing back and forth constantly blipping the throttle in an attempt to keep that hot engine from stalling?  You give the owner/operator (who thinks he looks like John Force staging his top-fuel dragster) the thumb’s up and say “Damn, that is one hell of a car!!!”.  The poor dude can barely wave back; remember, he is busy blipping that throttle and trying to work the B&M shifter back into “D”rive as soon the light turns green but somehow he manages to give you the “I’m a badass and I know it” nod.  In an instant the light turns green, and he is gone.  Except that instead of the sweet smell of burnt rubber you realize he just left a cloud of blue smoke. 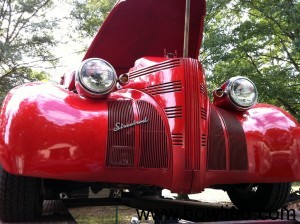 In the case of this Pontiac Streetrod (see the image on the left), in addition to the paint and engine as described above we can add “real” wire wheels and a custom tweed interior.  Last but not least, is one of the highly sought after “Safety Inspection Passed” stickers on the windshield that one of the nationally sanctioned associations puts on cars when they consider the car a pinnacle in hot rod engineering.

The car is on a lift for a reason:  the radiator was in pretty tough shape and since it is aluminum it was taken to my cousin Jim’s shop to see if it could be repaired (I’ll have more about that in a minute).  At any rate, Streetrod looks mighty sharp on the lift – from a distance.  Beauty is only skin deep. 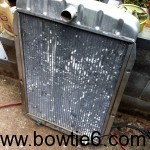 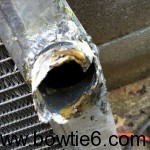 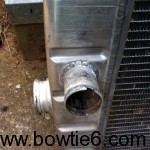 Behind front grill (note the trick Streetrod emblem) is that aluminum radiator I talked about before.  As it turns out, the reason the lower coolant line is so damaged is because it was sharing the same space as the front sway bar.  It also looks like someone has tried to do a quick fix on it.  Complicating matters, the Streetrod‘s owner must have used tap water for coolant and hence all the scaling.  Incidentally, the bottom rubber hose that attached to this radiator pipe was pretty clogged up.  The picture for the top inlet looks abused too.  Needless to say, Jim opted not to repair the radiator.  But the surprises have just started… 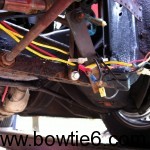 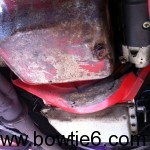 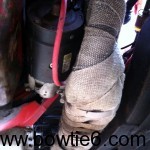 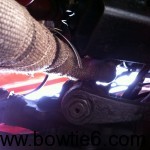 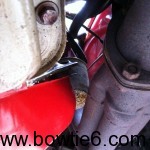 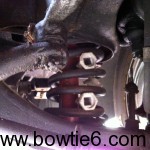 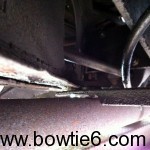 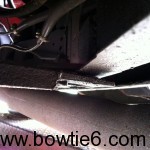 I  mentioned before the front sway bar competing for space with the radiator outlet.  However, lets take a look at what else is behind the radiator. 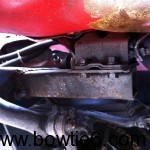 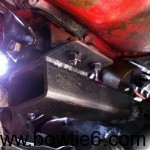 Streetrod‘s motor mounts are a real treat (click on the pics above).  Not only is the welding of the highest order and impeccable, but the design is amazing.  The whole cantilevered affair is something that begs to be admired welded directly to the front crossmember.  Believe me, these photos don’t make justice at how amazing this setup is. 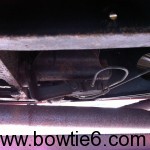 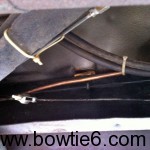 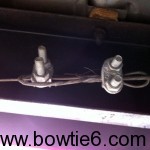 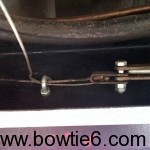 Part of the braking system on Streetrod is pictured above.  The master cylinder has been located underneath the car.  OK – that is all good but take a look at those rusted brake lines.  They look very poorly made and the threads on the fittings were covered with teflon tape – I presume they wanted to make sure no leaks would happen.  Then, take a look at the excellent work on the hand brake cable.  Incidentally, the cable was rubbing on the main hot feed coming from the trunk mounted battery.  And of course, next to all this is the main fuel supply line going to the engine.  Very safe indeed.  Finally don’t miss that small wooden body shim.  Spot on. 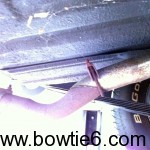 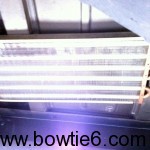 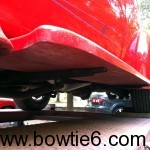 The last set of photos above show yet more creative details underneath Streetrod. 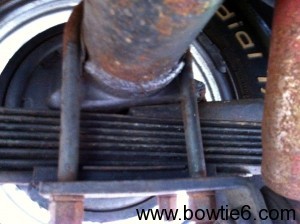 The last picture above is the scariest part of the build.  In order to get the rear end to line up with the tailshaft of the gearbox, Streetrod’s builder added the above pictured wedges to tilt the rear end down.  They tried to get the engine as low as possible (evident by the non-existent clearance between the exhaust and the body).  The deal here is that if one or both wedges decide to part ways with the car, the driveshaft is not going to be all too happy.  Not only is this an example of beauty being only skin deep, but also of a dangerous automobile on the street.  And like I said before, this car had a sticker where it had passed full “Safety Inspection”.