What a treat today has been!  Drove to the High Museum of Art Atlanta to see the Dream Cars collection exhibition, which will continue until September 7, 2014.  If you get a chance to make the drive, I highly recommend it.  A total of seventeen concept cars are on display each magnificent except for two turds.  Both German – one, a BMW and the second a Porsche.  Oh well, can’t have it all I suppose.

So I’ll start by listing what I thought was the most impressive in the collection:  a 1935 Type 57S Compétition Coupé Aerolithe.  The finish of this car is a shade of very light green metallic that exhibits properties akin to a chameleon:  one moment it looked light green, and the next it became almost silver.  And yes, this is the Bugatti with the exposed backbone assembled with hundreds of rivets.  Feast your eyes… 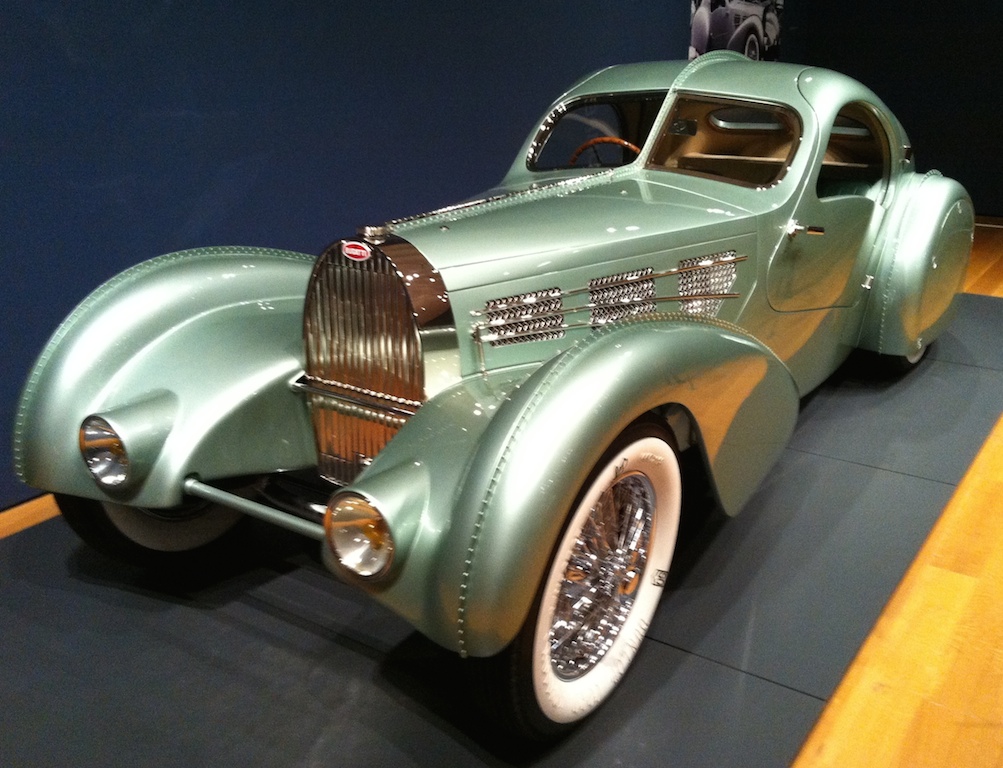 The front of the car displays an immense amount of exceptionally perfect chrome.  The grill has what appears to be thermostatically controlled vertical blade arrangement allowing the correct amount of cool air to keep the engine from overheating.  The headlights were particularly impressive:  everything was crystal-clear except for the bulbs: they were yellow.  The side vents on the hood were also flawless and the latches holding the sides were magnificent. 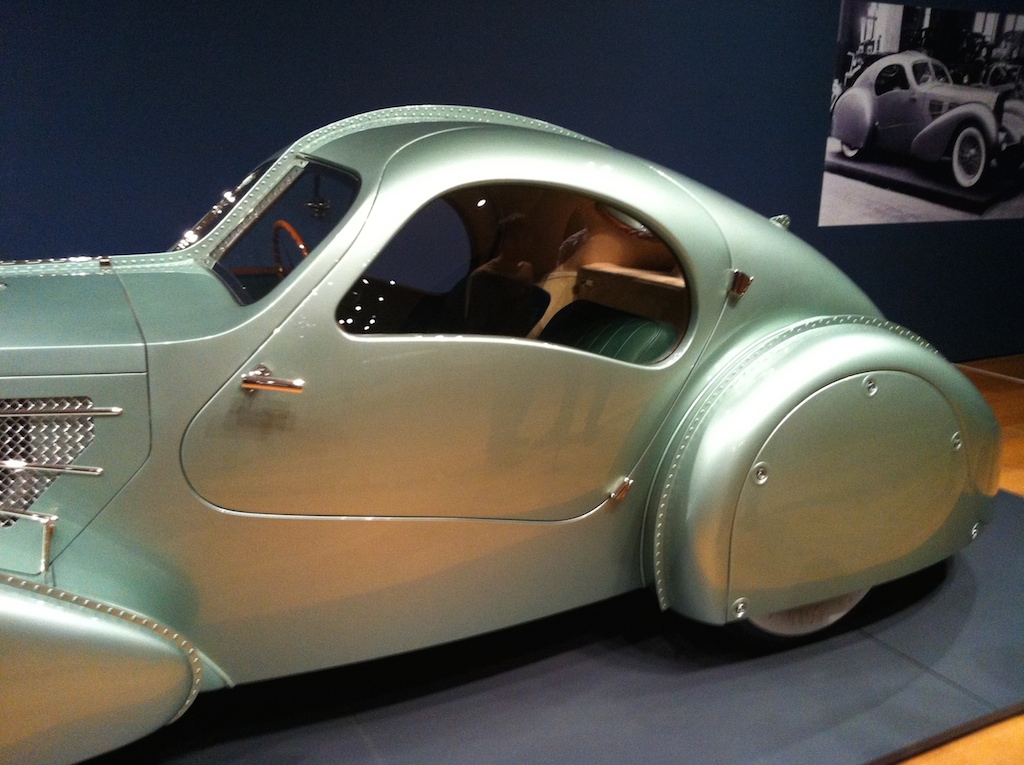 Moving right along, notice the doors.  What a door!  Check out how high the door sills are and the teardrop design of the side glass window.  The occupant’s shoulder would be even with the lower edge of the window – how awesome is that?  Finally as if it were not obvious enough, those are suicide doors held in place by two delicately made door hinges.  To make something look this simple and elegant takes an obscene amount of knowledge, craftsmanship and time. 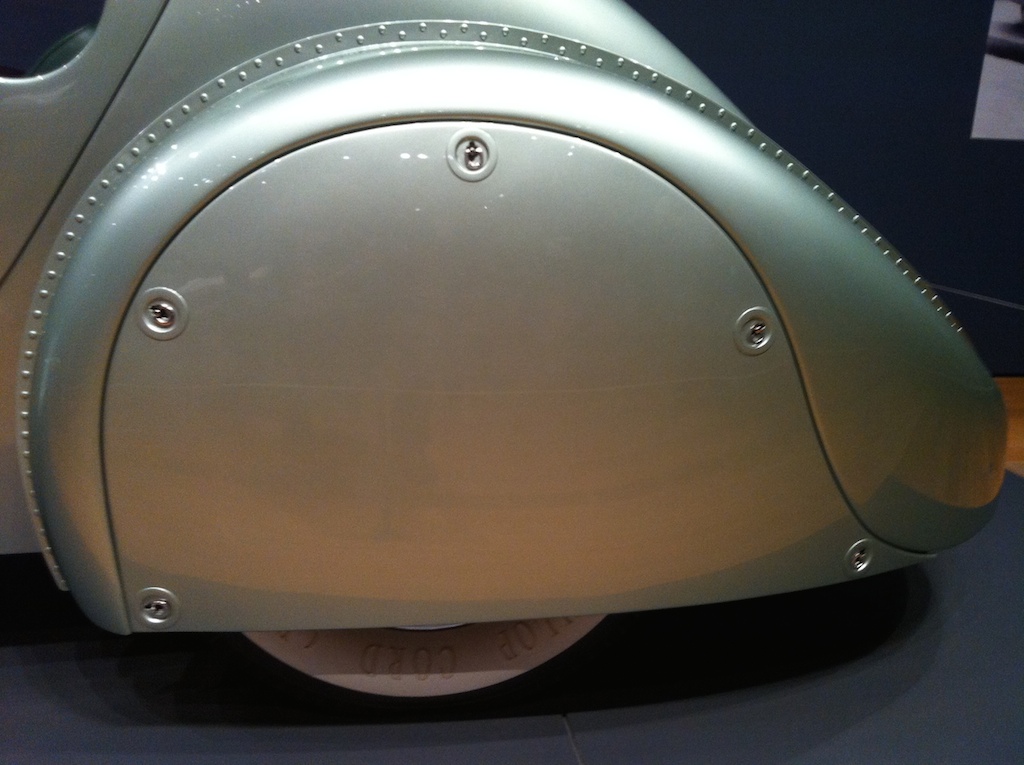 Here is a closeup of the rear wheel cover.  The cover has five fasteners that when turned in the correct direction allow the cover to be removed.  Pay close attention to the lower right corner where the wheel cover meets the rear curve of the fender.  The amount of detail is immense.  The cover has a compound curve – it boggles the mind how this the master craftsman in charge hand-formed this from a sheet of metal using his hands, an English Wheel, perhaps a planishing hammer…  And it goes without saying, but look at all those rivets holding the fender to the rest of the body. 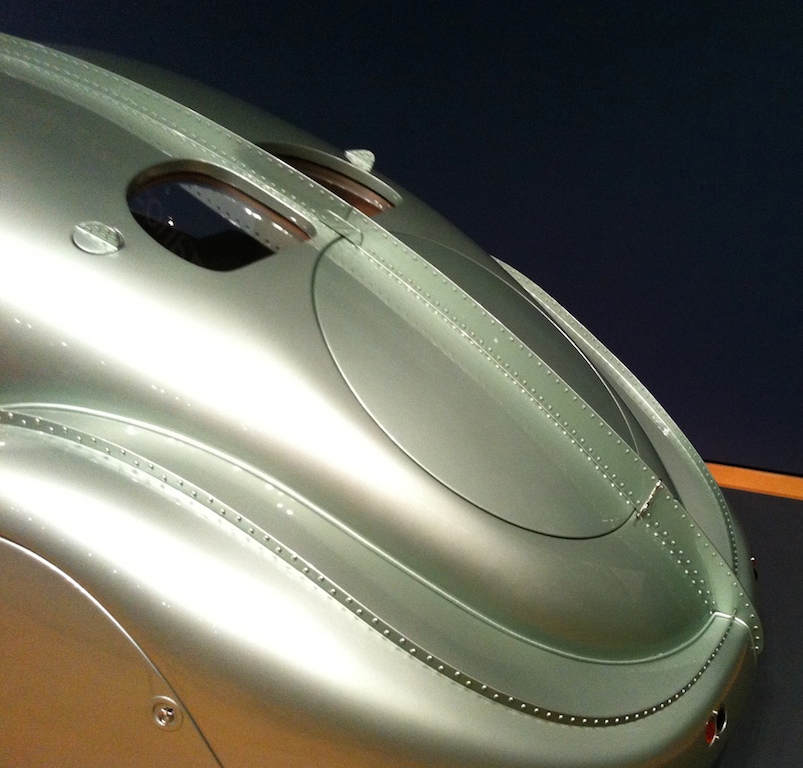 The tail of this Bugatti is once again an amazing work of art.  Here we see the exposed backbone with all those alternating rivets.  The spare wheel must be under that large round cover.  Notice how perfect the sweeping seam on the fender meets the backbone in the middle.  Finally, below the roll-pan are four very tastefully placed indicators.  They are just neatly tucked away as to not distract the eye from the flowing curve of the back of this work of art.  Amazing don’t you think? 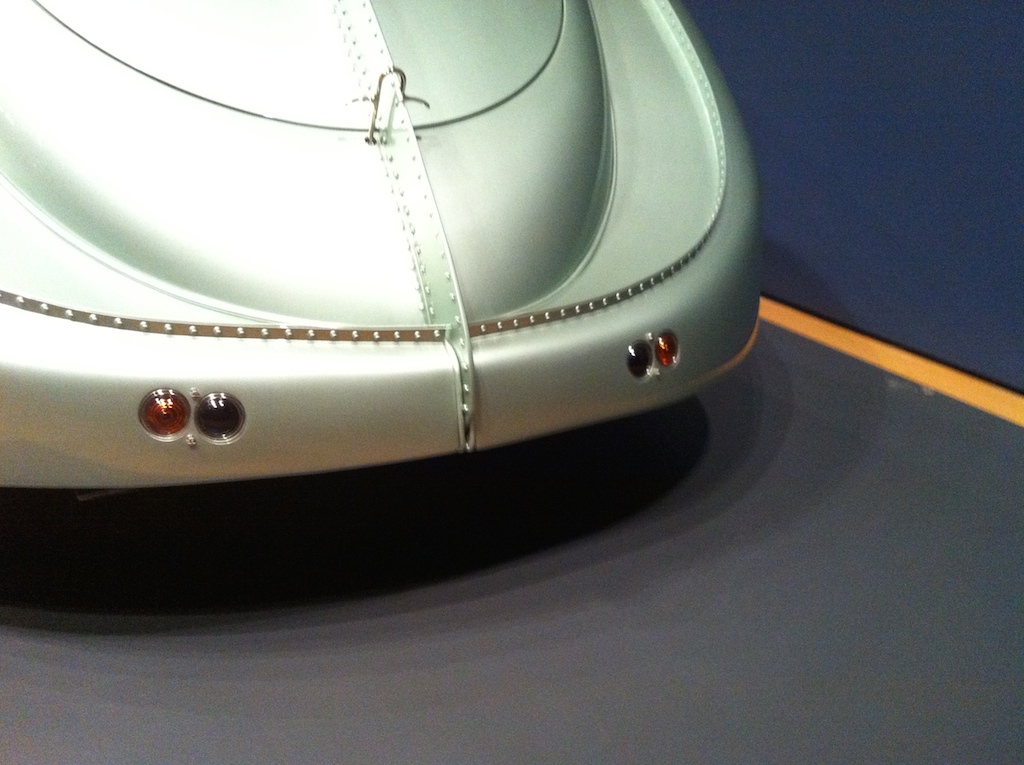 Here you see the four lights I mentioned before, but wait…  Look at that simple but elegant chromed release handle for the boot cover.  It appears to be designed to be lifted and then pulled back where it would rest on a detent.  Then the entire back cover would open. 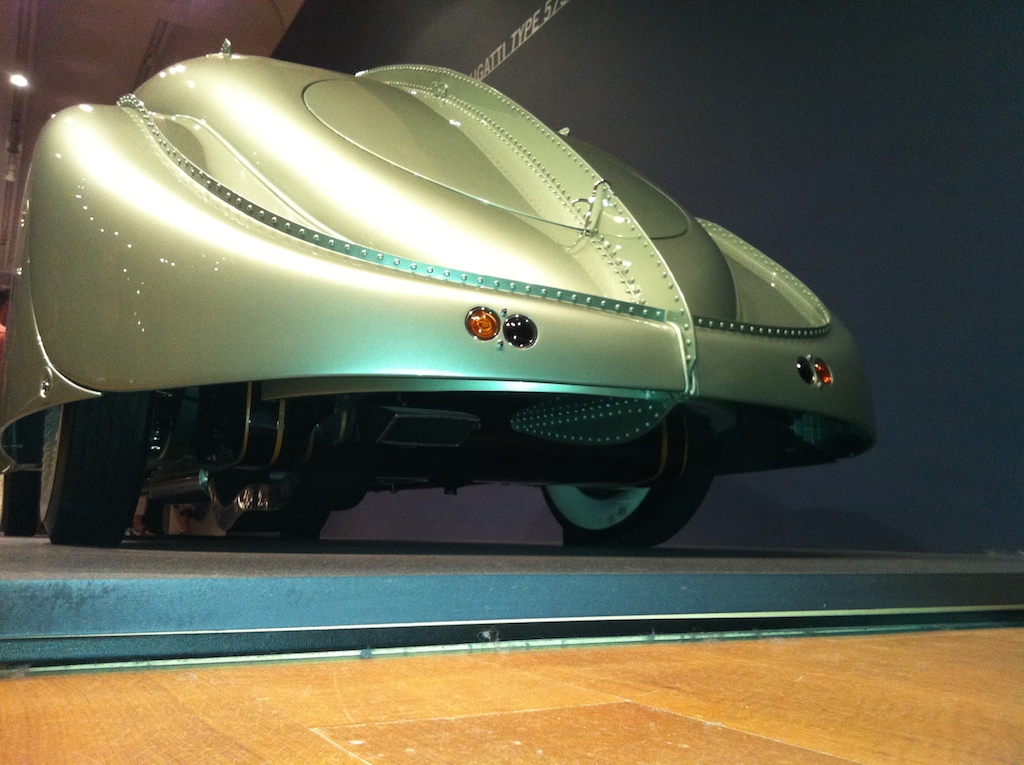 This picture shows the exposed backbone actually goes under the car for a certain distance.  I was unable to get a closer look but I think there are even more surprises under all the shiny bodywork. If you look close enough towards the left, you see that small tapered point on the wheel cover that shows just how high the level of detail exists on this coachwork. 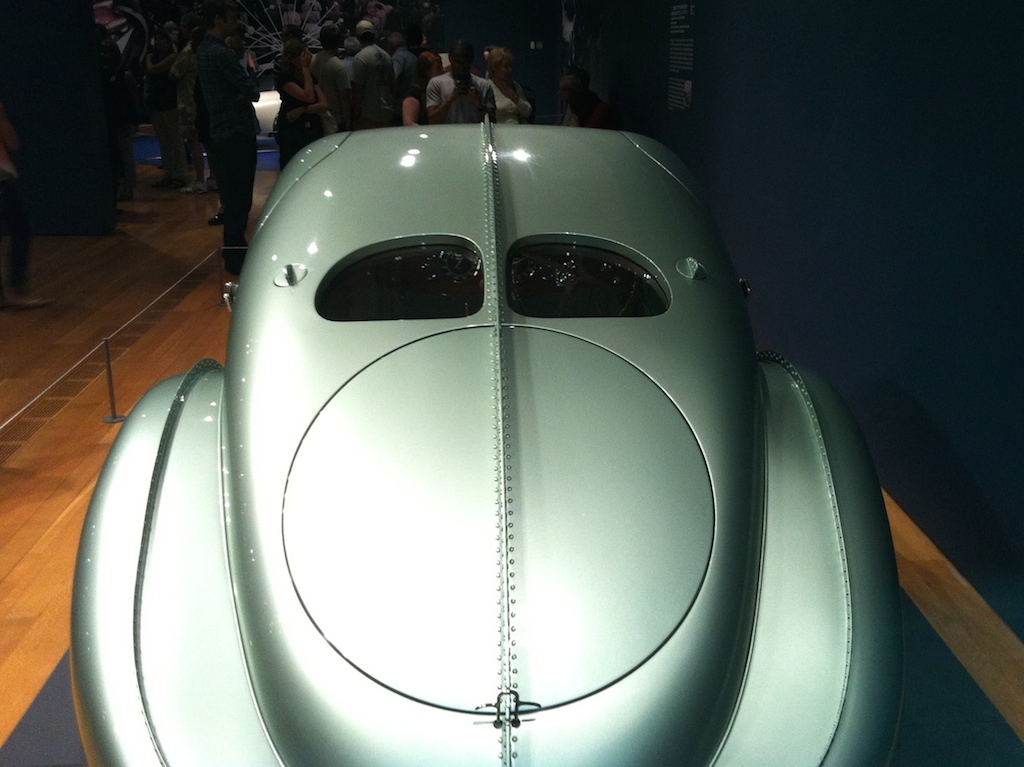 Here are the back windows.  Unfortunately the light was not good enough to show the interior, but from this vantage point I could actually see all the instrumentation as well as the dash and steering wheel. 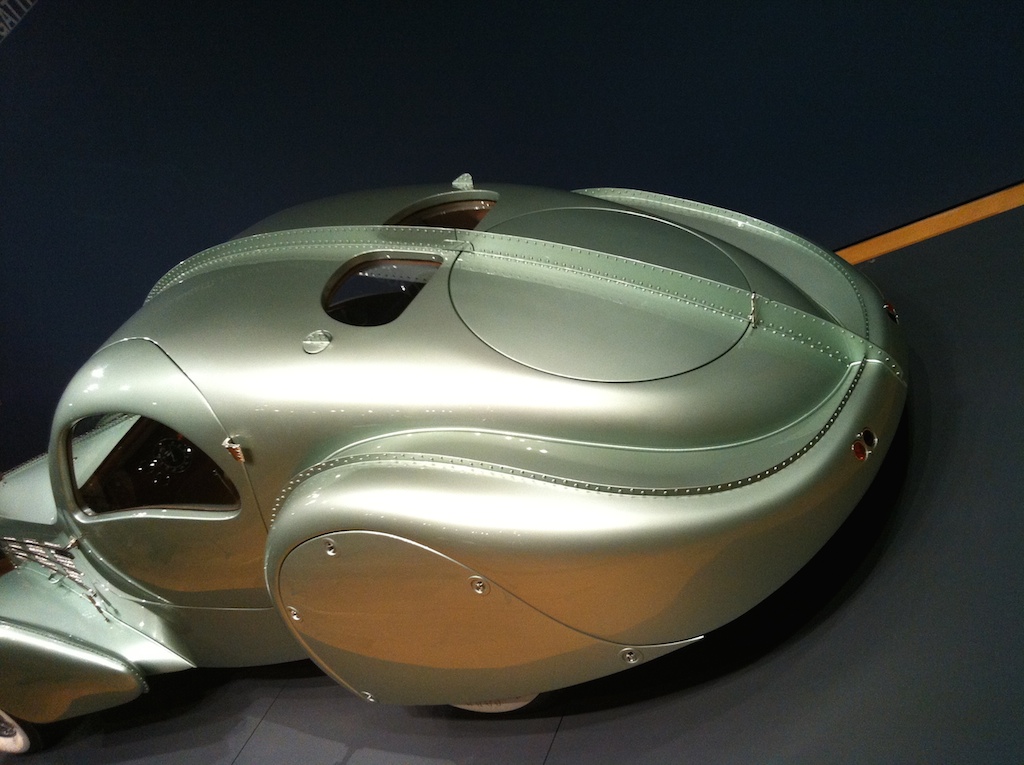 I realize this is not exactly the best of photos, but look at how the door extends into the roof area of the car.  I suppose this would have aided the occupant when entering/exiting the inside of the car.  Nothing seems left to chance here.  Exceptional, don’t you think? 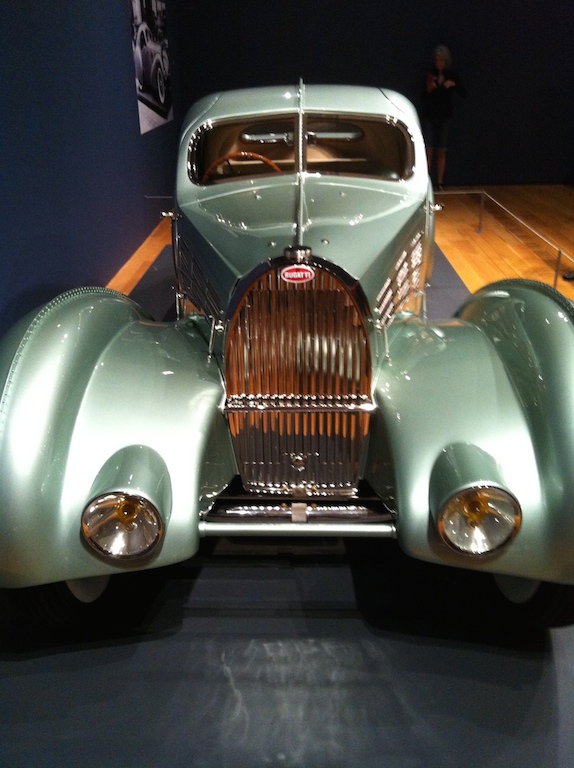 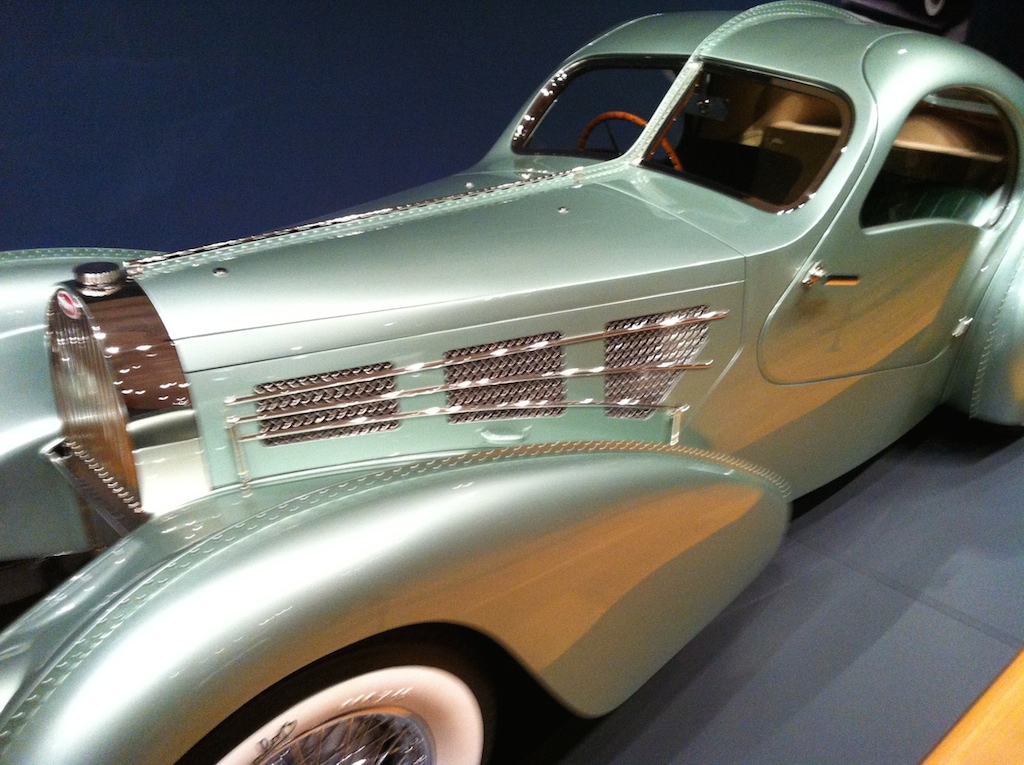 I took the two pictures above, to highlight something particular about this car.  The entire body is a flow of curves.  The long swooping fenders, the compound curve of the rear wheel cover, the roof, the curves on the rear deck…  Except for one thing…  Look at the extreme sharp edge on the engine cover as it meets the firewall.  Then think when this was all formed:  the mid 1930’s.  This is not a car – this is art. 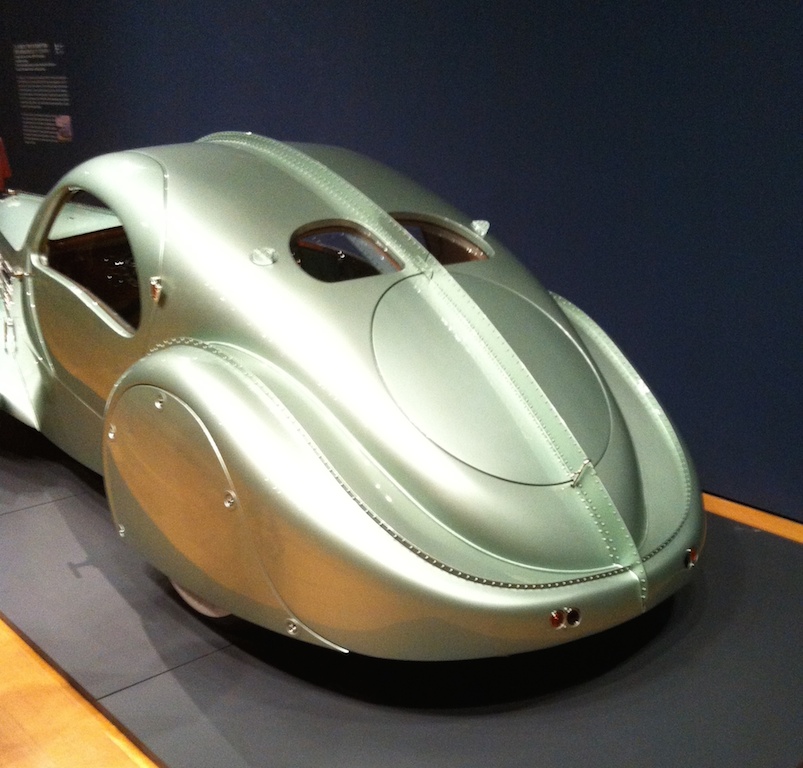 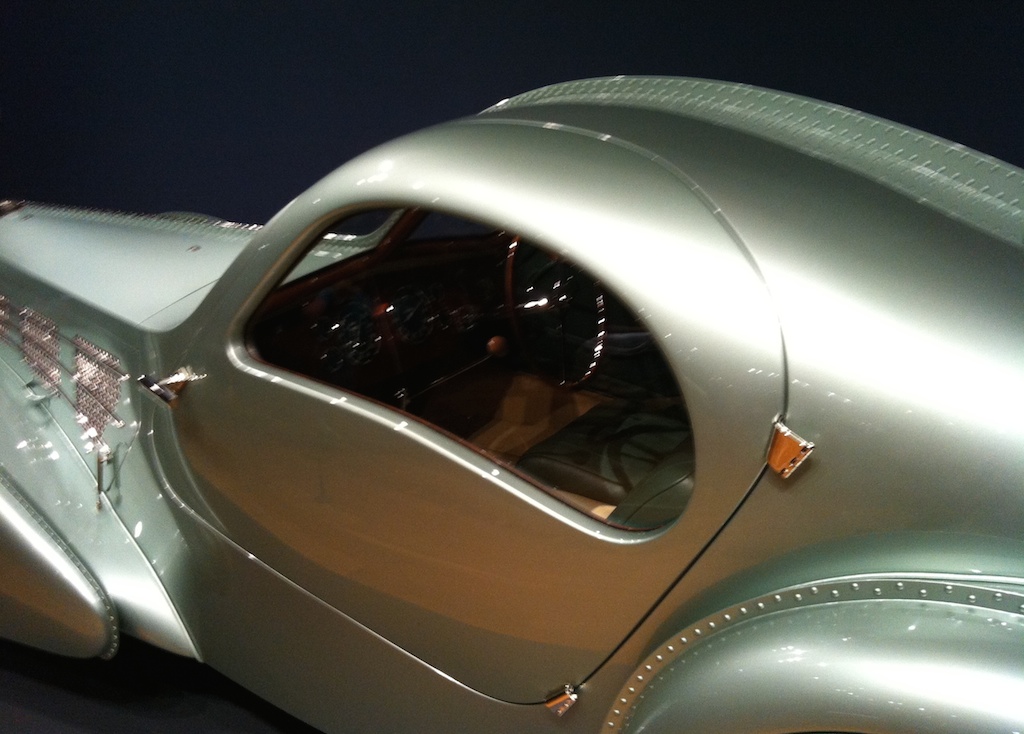 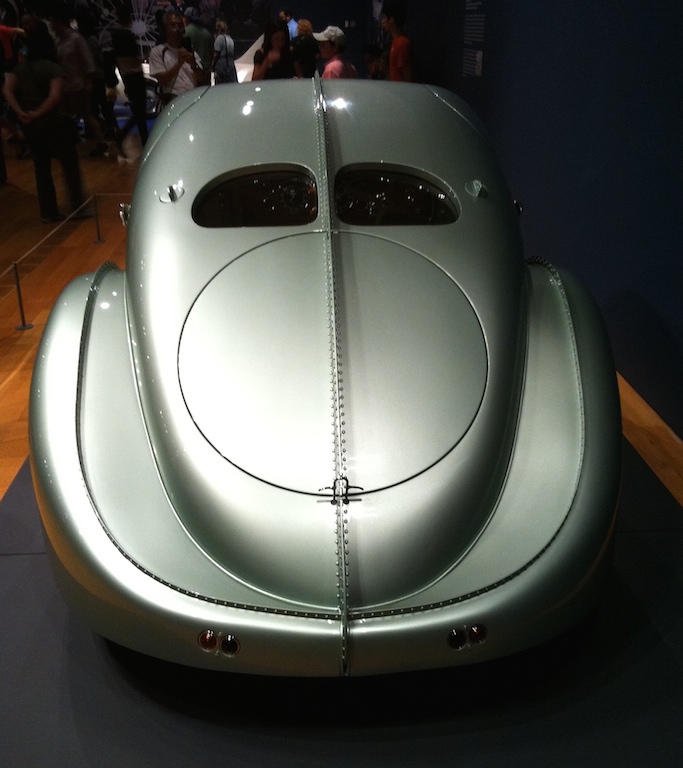 Stay tuned…  I took many pictures of the rest of the cars in the collection.  I’ll try to write about them in the next few posts