ECOTEC engines in British sports cars are a reality.  These engines offer great power-to-weight, excellent mileage and a wonderful exhaust note.  Folks, this is the way to go when modifying a British sports car.  The proof of concept was my cousin Jim’s TR4.  He has been working on this car for a couple of years, and little by little it has become a reality.  There are so many awesome things about this car!

The frame is hand built.  This is the same design that is being used for bowtie6‘s new frame.  My frame will be a simpler version of the one on the TR4 but basically will consist of the basic principle:  square tubing, modified TR6 front suspension, and a 4 point suspension rear axle with posi-traction.

The TR4’s body has been left stock, except for the bonnet, boot lid and hard top.  These components have been hand-made out of aluminium.  Yes, aluminium.  The main directive for the TR4 was to make it as light as possible and by making these body panels from aluminium a great deal of weight was saved.

The engine is an ECOTEC 2.4 litre and matching five speed from a Solstice.  Last year, the car was tested with the smaller 2.2 litre version.  We found the engine to be awesome and very responsive.  The ECM had to be fiddled with a little, but the result was quite impressive.  If you want to see a video of the car at that time, check this out:  ECOTEC TR4 video

Pretty cool huh?  Well – that was done about a year ago and showed the car in pretty rough state.  It was in primer, things were not bolted down tight, the interior was missing and the wiring was still being worked on.  Some 1500 miles were put on the car by Jim and all pointed in the right direction:  the care was lightweight, very responsive and the frame provided a very tight, solid feel.

The TR4 was fully disassembled, this time for its final assembly including a new 2.4 litre ECOTEC, paint and interior.  This time it is for real!  After many months of work, this is what the first ECOTEC powered  TR4 looks like: 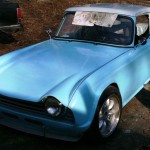 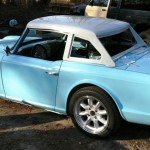 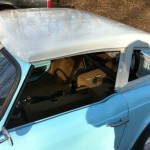 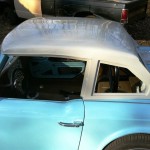 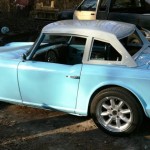 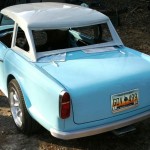 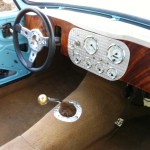 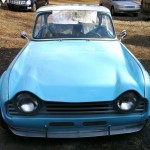